The Second Swordsman – ‘The Walks’

Last week we presented the first in Malcolm Garcia's series of Second Swordsman blog posts. Such was the positive response that this week we have the second blog in the series. So, over to Malcolm...

The Second Swordsman – ‘The Walks’

In my first attempts at using the Second Swordsman process to successfully complete a Fighting Fantasy adventure, I failed in each of the first three books. The process of always choosing the second option resulted in me dying in a variety of ways, occasionally while tantalisingly close to my goal. For my next couple of attempts I decided to revisit one of the most famous adventures (if only by virtue of its cover), Deathtrap Dungeon and the V2.0 version of it, the Trial of Champions, both were written by Ian Livingstone CBE. The first published in 1984 and the second in 1986, so I was hoping that his temperament would have eased over those two years to give me a decent chance of success. 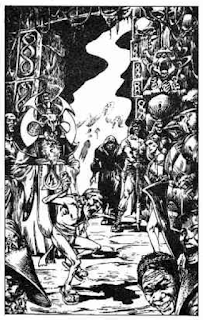 Or not. Once again when following every second choice I failed in each of my adventures and both deaths were also somewhat disappointing. In Deathtrap I foolishly chose to eat some strange mushrooms I found in a cellar. They caused me to swell dramatically in size (similar to Violet Beauregard in ‘Charlie and the Chocolate Factory’) and I became stuck in there, apparently forever. (Don’t cleaners ever visit the dungeon to remove the remains of unsuccessful competitors?) And in Trial I eventually fell victim to Lord Carnuss’s meat-grinding-series-of-trials after having to fight one-slave-too-many and I died on Blood Island without even managing to enter the new dungeon.

In Deathtrap, unflinchingly choosing the second option still had me ignoring many potentially useful things, such as a skeleton holding some parchment – seriously, in a creepy labyrinth I ignored parchment! – a box with my name on it, a giant idol with jewelled eyes, and an unattended backpack. I also didn’t take a wristband decorated with rat skulls, but I’m okay with that choice. During my journey I ignored three doors – which is a silly way to go about exploring a place, but this wasn’t as bad as the door-ignoring-spree I went on in The Warlock of Firetop Mountain. However the Second Swordsman process did force me to eat the aforementioned dodgy fungus, rather than giving me the option to ignore it.

Choosing option two also provided an awesomely stupid start to Trial as I decided to attempt the least‑thought-through escape in the history of Titan, and, as a result, I lost 4 STAMINA points by assaulting a guard. (This would later prove to be a hefty price to pay at such an early point in the adventure.) But option two did make me choose the correct weapon with which to take on the Bonecrusher beast.

During my short-lived journey through Deathtrap I only fought one creature, the decidedly un-exotic caveman. However, I was happy with this because my initial SKILL was fairly low, but I still lost more than a few rounds of combat before killing my opponent. In Trial I faced a total of three adversaries before being killed, but all were just varying sorts of slaves. The first had a SKILL of 10, which I think was a little too high at such an early stage in the adventure (my starting SKILL was 7). He reduced my STAMINA to 4, and the remaining two slaves I fought each won a single round against me. Without the opportunity to replenish my STAMINA between fights, even though the enemies got slightly weaker, this continual wearing-down was unlikely to result in anything other than my early death. But this is probably just as Lord Carnuss (and Ian) would want it – there’s no sense in sending anyone other than the strongest fighter into the new labyrinth.

One aspect of Trial I was pleasantly surprised with was that the results of several brutal trials were based on tests of SKILL or other random dice rolls, rather than testing my LUCK. Had it been the latter I would almost certainly have been unlucky eventually, and probably killed, much sooner than I was.

Unlike The Citadel of Chaos and The Forest of Doom, I got nowhere near the geographic end of Deathtrap or Trial. If I was to repeat Deathtrap I would certainly map the underground labyrinth – there were many occasions where I would reach a junction but have to go north, without being given the option to explore earlier parts of the maze. And if I were to repeat Trial I wouldn’t be so stupid as to attack an armed guard at the first opportunity.

Because both Deathtrap and Trial ended so ignominiously, I thought I’d try another adventure to lift my spirits. Caverns of the Snow Witch was also written by Ian Livingstone and the results of following the Second Swordsman process were not nearly as grim. Sure, I didn’t succeed in the adventure (I’m now zero for six), but I did get as far as finding the lair of the titular Snow Witch. And although I didn’t have the necessary items to kill her, the Second Swordsman process did helpfully provide me with a cloak that deceived some demon-worshippers and summoned a genie that helped me evade a sword-proof Crystal Golem. 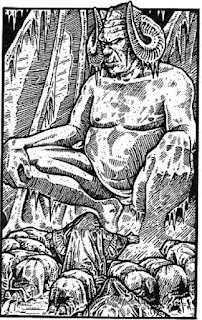 Caverns also had some interesting battles, each of which lasted more than a few rounds. These put the ‘Fighting’ into Fighting Fantasy. Both the Mammoth and the Yeti were very hard fights early on (with SKILL scores of 10 and 11 respectively), but unlike Trial, once the weaker characters have been weeded out by these strong adversaries, the victors are able to replenish their STAMINA and continue on. Because I also had to fight a Giant and a Dragon during my adventure, this was the first time I’d needed to use my STAMINA potion (the second potion available to choose) and half my rations.

So while I’m becoming less confident that the Second Swordsman process will lead me to victory, I am finding that it’s not proving to be a constant path to becoming creature compost.

Thanks again, to Malcolm, for his blog post, and don't forget to get in touch if you have any suggestions for item for the Official Fighting Fantasy blog via mail@fightingfantasy.com.