With 20 weeks to go until Fighting Fantasy Fest 2, it seems timely to announce some of the guests who have confirmed their attendance*.

Steve Jackson and Ian Livingstone will be in attendance at the event, talking about the Fighting Fantasy series, which will be celebrating its 35th anniversary at the even. Ian will also be signing his new book Port of Peril as well as the Freeway Fighter Comic.

Russ Nicholson - one of the artists that really helped define the look of the Fighting Fantasy world, Russ illustrated eight FF gamebooks, including the seminal The Warlock of Firetop Mountain. He also illustrated all of the FF novels, the young FF Goldhawk series, and two of the three original AFF books. More recently he contributed extra illustrations to Tin Man Games' adaptation of Warlock.

Alan Langford - the illustrator of six FF gamebooks, including Island of the Lizard King and Creature of Havoc, Fighting Fantasy Fest 2 will be Alan's first convention.

Tony Hough - the illustrator of four FF gamebooks, including Night Dragon and Bloodbones, Tony was also a guest at the first Fighting Fantasy Fest.

Jim Burns - the artist behind the covers of not one, but two different editions of Freeway Fighter. Jim's classic 'red corvette' cover has also been used as a cover variant for the Freeway Fighter Comic.

Peter Darvill-Evans - author of three FF gamebooks, including Beneath Nightmare Castle and Spectral Stalkers, Peter was responsible for starting Virgin Publishing's Doctor Who New Adventures line of tie-in novels, after the popular TV show went off air in 1989.

Jamie Thomson - co-author of three FF gamebooks, including Talisman of Death and Sword of the Samurai, Jamie was the winner of the Roald Dahl Funny Prize 2012 for the novel Dark Lord: The Teenage Years.

Jonathan Green - author of seven FF gamebooks and YOU ARE THE HERO - A History of Fighting Fantasy Gamebooks, Parts 1 and 2.


And that's not all! More guests will be confirmed in due course.

Don't forget to pick up your ticket for Fighting Fantasy Fest 2 today. 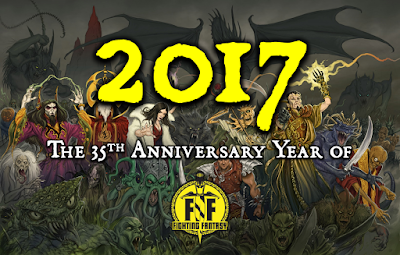 * Please note, all guest attendances are subject to health or other work commitments.
Posted by The Warlock at 09:00