The Second Swordsman – 'The Scales of Adventure'


The Second Swordsman – 'The Scales of Adventure'

While all manner of creatures roam the continents of Titan, there are very few species that have become organised enough to form societies and take control of the land around them. Humans have their cities, such as Port Blacksand and Kharé, and the dwarves have Fangthane and Stonebridge. But there are also the Lizard Men, who have their own extensive Empire in south-western Allansia and are your principal adversaries in two FIGHTING FANTASY adventures – Island of the Lizard King and Battleblade Warrior. 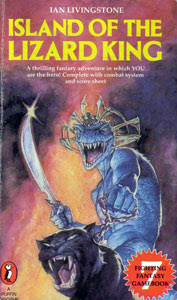 Island was the fifth book to be penned by Ian Livingstone (making this the seventh of his adventures I’ve attempted using the Second Swordsman process) while Battleblade was the only time that Marc Gascoigne wrote a FIGHTING FANTASY book, despite being deeply involved in the series. Both Island and Battleblade were illustrated within by Alan Langford, the go-to guy for dinosaurs, and he would later return to provide more thunder lizards for Portal of Evil (which I’ll visit soon).

The Second Swordsman process performed surprisingly in both of these adventures. The bad surprise was in Island where I set a new record for defeat. The mission was fairly straightforward, kill the eponymous Lizard King and free the prisoners that he and his Lizard Men army are keeping captive on Fire Island. My initial rolls gave me decent SKILL and LUCK scores and, while my STAMINA was lower than I’d like, the background to the adventure provided plenty of provisions to replenish my STAMINA between battles. I arrived on the island with my buddy, Mungo, who told me of his father’s death in Baron Sukhumvit’s Deathtrap Dungeon (an adventure where a previous incarnation of me perished way too soon because of some dodgy fungus). There is some speculation that the hero of Island is the same hero from Deathtrap but, as my character mentioned nothing of the labyrinth during our boat ride, I figure this to be unlikely. 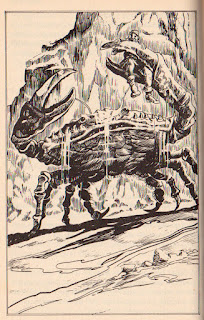 My defeat on Fire Island was brisk. I initially found some pirates huddled around a treasure chest. They no doubt thought that somewhere with Fire Island’s reputation would be a safe place to stash their booty. I decided to ignore them (a frequent action when using the Second Swordsman process) and explore somewhere else, whereupon Mungo was seized by a giant crab. Rather than come to his aid with my sword, I cowardly ran away… into quicksand… where I instantly died. While my previous deaths in both Deathtrap and Trial of Champions (which were also authored by Livingstone) were relatively early, my adventure on Island set a new record – dead in four choices.

Chastened and reincarnated, I headed south to Vymorna where my mission was to head into the mountains of the Lion Heights and find a magical weapon that would help to lift the siege imposed by the Lizard Man Empire upon my city. While my initial SKILL and STAMINA were good, my LUCK score was not ideal. Battleblade also limited the number of provisions to four and removed the usual ability to choose a helpful potion. However the Second Swordsman process was up for the challenge. 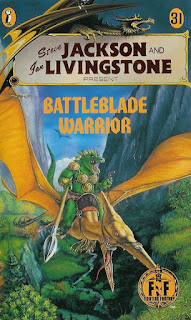 During my adventure I fought the most creatures I have so far – twenty-two in total, seven of which were Lizard Men (which is a welcome change from Island where I killed nothing). The monsters were nicely balanced with only a few being fairly difficult – the Swamp Mutant and the Warrior King – and in several of the battles I lost no rounds of combat at all. At one point I was lucky enough to grab a Lizard Man by his foot and have him fall onto his own sword, and I also had the most melees I’ve yet encountered in a FIGHTING FANTASY adventure.

Unlike several other adventures, in Battleblade choosing every second option did not make me ignore opportunities for action. I struck down the crew of a catapult which was throwing projectiles at Vymorna and also attacked several Rat Men engineers who were part of the siege. After escaping the siege I crossed plains and jungle to reach the city of Kharnek, hidden in the mountains and the place where the Blade of Telak, the magical weapon I was searching for, was said to lie. Something that Battleblade does quite well is to give a sense of scale (pun not intended). The journey from Vymorna to Kharnek took several days and there were several occasions when I wondered if I was on the right path at all. 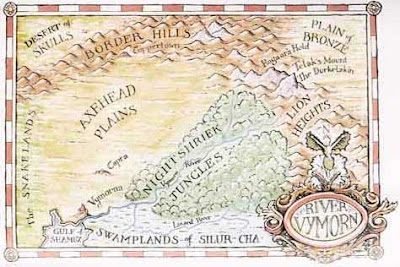 While I lost plenty of STAMINA during my battles in Battleblade, my four provisions (and several opportunities to replenish these) kept my STAMINA from failing me. My longevity did, however, have a cost upon my LUCK which was constantly eroded away. Fortunately Battleblade replaces some obvious LUCK tests with SKILL trials (which I passed easily) and even when I was unlucky, I wasn’t doomed to an instant death and sometimes had the opportunity to fight my way out of the situation.

Once I reached Kharnek I found half of the Blade of Telak and, for a brief moment, thought this would be the first adventure where the Second Swordsman process worked. Until it didn’t and I suffered an instant death. Backtracking for the first time, I found where I went wrong and how I could have won. Thus, if not for one choice where I bizarrely decided not to pick up an item within a few sections of the end, I would have succeeded. In other FIGHTING FANTASY adventures (such as The Citadel of Chaos, The Forest of Doom and Starship Traveller) I have come tantalisingly close to the geographic end of the adventure, but without having either knowledge or special objects necessary to succeed. In Battleblade this was not the case. For most of the adventure all that is necessary is to survive – missing something near the start will not doom the reader to failure and some clever or lucky choices near the end will be rewarded with victory.

I’ll revisit both Island and Battleblade in the near future, but without the Second Swordsman process. I can’t possibly do any worse in the former and I think I’ve got a good chance of succeeding in the latter. 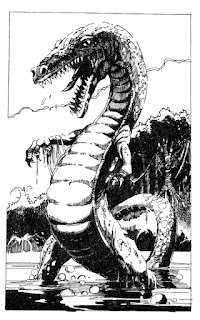 Thank you, as always, to Malcolm, for his latest Second Swordsman blog post. If you have any suggestions for items for the official Fighting Fantasy blog don't forget to get in touch via mail@fightingfantasy.com.