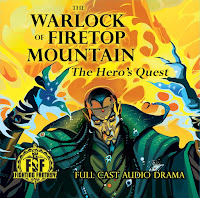 An officially-licensed, full-cast, audio drama series, based on classic titles from the Fighting Fantasy gamebook series is currently being crowdfunded on Kickstarter. The project actually hit its funding target in under 12 hours and is close to being 200% funded within its first day. And there are still 40 days for the Kickstarter to run!

The audio drama series is being produced by FoxYason Audio, the talented people behind last year's The Warlock of Firetop Mountain: The Hero's Quest. The series will take the form of 4 x 50 minutes episodes, each based on a different gamebook, available as download and CD.

The adventures in question are Ian Livingstone's The Forest of Doom and Deathtrap Dungeon, and Steve Jackson's The Citadel of Chaos and Creature of Havoc.

Rewards on offer to backers range from the Potion of Helpfulness to the chance to be part of the series, playing a cameo role on one of the recordings.

To find out more, and to pledge your support, follow this link to the Fighting Fantasy Audio Drama: The Series Kickstarter page.