Rhianna Pratchett in the Bookseller

Scholastic UK is gearing up for the release of Rhianna Pratchett's brand new Fighting Fantasy gamebook Crystal of Storms, at the end of September, and as a result this article appeared on the online version of The Bookseller on Thursday, International Gamebook Day.

Here are some of the highlights, that will be on interest to Fighting Fantasy fans:

Being tabbed as the newest “special guest” to author a Fighting Fantasy book is something of a childhood dream come true for Rhianna Pratchett. The video game writer and screenwriter was a superfan of the iconic Choose Your Own Adventure-esque series when she was young. Maybe a little overly attached to the books, as they led to an early brush with the long arm of the law (OK, it was the hard nuts at Somerset County Council library services).

“I read Fighting Fantasy a lot as a kid,” Pratchett explains. “I used to get in trouble with my local library for not bringing them back. I remember a threatening letter that they were going to take me to court if I didn't return one of the books. I was reading a lot and I managed to lose it under my bed”

The license was bought and resurrected by Scholastic in 2017, which happily coincided with the series’ 35th anniversary, a burst of ‘80s nostalgia (helped by “Stranger Things” and a resurgence in the popularity of Dungeons & Dragons) and the overall “Game of Thrones” booster shot to the fantasy sector. Suddenly, Fighting Fantasy was cool again. Scholastic has rejacketed and rebooted some backlist, released a tranche of new titles, while Young Bond creator Charlie Higson was the first special guest author to hop on board with The Gates of Death...

Pratchett's Fighting Fantasy title is Crystal of Storms in which the reader/player is a member of the Sky Watch charged with keeping the peace in the floating cloud islands of Pangaria. When one of the islands, Nimbus, crashes into the Ocean of Tempests after an explosion, you set out to explore the other islands, facing off against the elements and sea beasts, in order to try to raise Nimbus from the depths.

Pratchett pitched the idea to Scholastic, inspired by both a portion of Higson’s book in which there was a flying bier, “and I wanted to play with that combination of flying tech/magic idea” and, somewhat more leftfield, after reading of a rare cloud formation mirage that appeared over southern China a few years ago which looked like a floating city... "My tale is maybe a little bit lighter than some others and there is a police procedural element which is quite new to the world. But, I did bring back some classic monsters from the books of the '80s and '90s, and I had a bit of fun with that.” 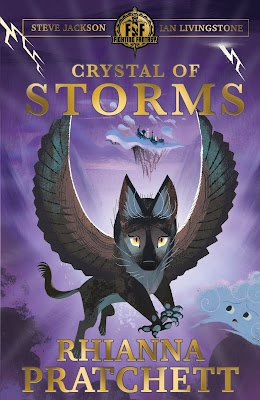 Click here to read the opening of the adventure.

Today is the 38th anniversary of the publication of the original Fighting Fantasy gamebook, The Warlock of Firetop Mountain, by Steve Jackson and Ian Livingstone. 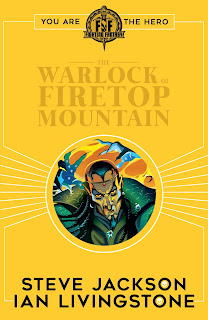 In honour of this momentous event, today sees the first International Gamebook Day take place, online, all over the world. So far the covers of new Polish translations have been revealed and Branching Narrative have a 48 hour sale happening for Deathtrap Dungeon: The Interactive Video Adventure. 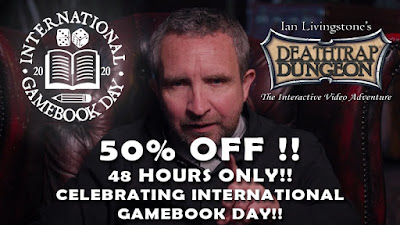 Check out the official International Gamebook Day for all the latest news, and tune in at the following times for interviews with these Fighting Fantasy authors and artists. 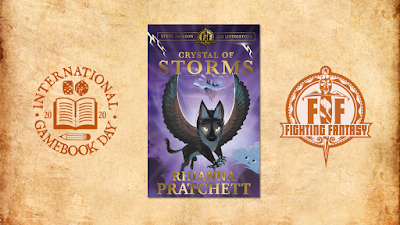 Click the image above to read the opening of Crystal of Storms.

In an exciting development, Rhianna Pratchett is also going to be interviewed by Olly Mc, as part of International Gamebook Day, on this Thursday, 27th August 2020.

If you have a burning question you would like answered, you can post it here. And don't forget you can also post questions for Jamie Thomson, Russ Nicholson, Charlie Higson, and Guests of Honour Ian Livingstone here. 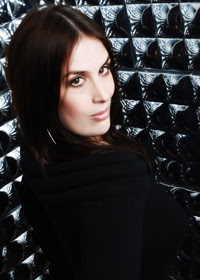 Share the International Gamebook Day Facebook event page with all your Fighting Fanasy friends and join in the with the fun on Thursday. 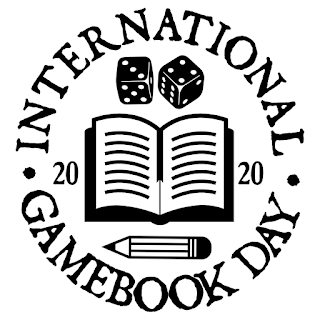 The very first International Gamebook Day is taking place on this Thursday, 27th August 2020, and Fighting Fantasy gamebooks are going to be part of the celebrations.

Co-creator of the Fighting Fantasy series Ian Livingstone is going to be Guest of Honour on the day, and will be talking to Olly Mc, of the StoryMaster's Tales, about his gamebook work, which spans almost four decades. 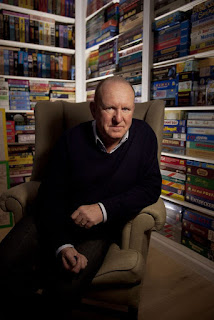 Also being interviewed by Olly for the event are FF authors Charlie Higson and Jamie Thomson, and FF art legend Russ Nicholson. 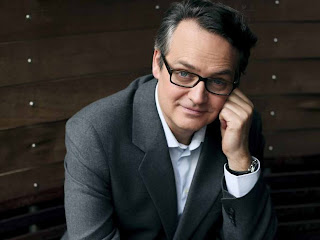 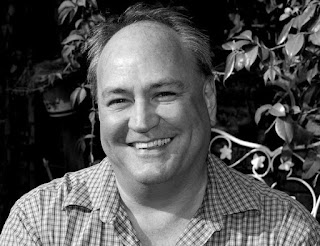 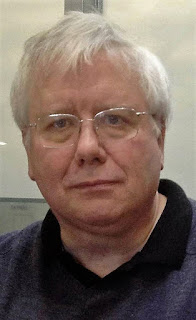 You can get involved by letting know what you want Olly to ask his interviewees on Thursday, and the place to post them is here.

The day's festivities will conclude with a Virtual Beer-o, hosted by James Aukett, which will be kicking off at 8:00pm.

A number of companies have special offers lined up for the day, including Branching Narrative, so you will be able to pick up Deathtrap Dungeon: The Interactive Video Adventure at 50% off!


So keep an eye on the International Gamebook Day Facebook event page and join in the Fighting Fantasy fun on Thursday.

The Warlock was very disappointed when the UK Games Expo had to cancelled this year, due to the pandemic currently ravaging the Earthly Plane. However, he was delighted when the organisers announced that the event would be moving online.

Anyone who has previously enjoyed John Robertson's attempts to escape Deathtrap Dungeon, under the watchful eye of dungeonmaster Ian Livingstone, either at the UK Games Expo or Fighting Fantasy Fest 3, will be delighted to hear that the pair are returning for Virtually Expo. 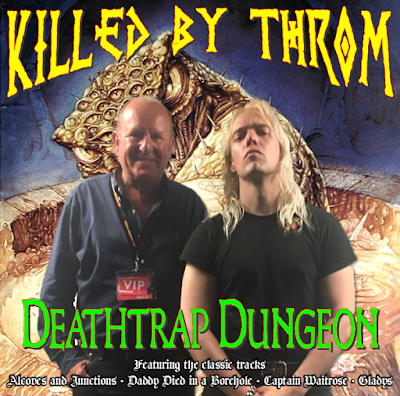 On Saturday 22nd August, 6-7:00pm BST, Ian Livingstone will challenge John Robertson to play through his classic Fighting Fantasy book City of Thieves on a quest to defeat the demonic sorcerer Zanbar Bone.

To do so he must walk the murderous streets of Port Blacksand to seek help from an old Wizard. Will John succeed? Or will Ian do his best to lure him to his doom?

This is a free to watch event.To watch the show on Twitch click this link... 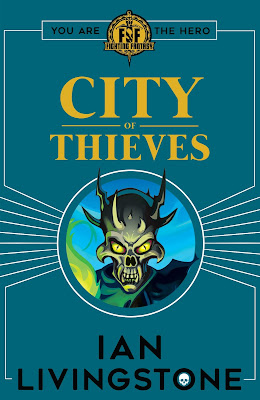 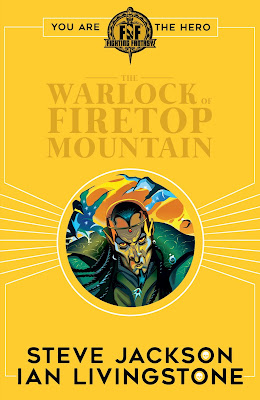 Last week, gamebook author Jonathan Green proposed that 27th August should be designated as International Gamebook Day, when people around the world can celebrate their love of interactive fiction.

He chose that date because it was on 27th August in 1982 that the first Fighting Fantasy gamebook, The Warlock of Firetop Mountain, written by Steve Jackson and Ian Livingstone, was first published.

If there were to be an International Gamebook Day, how would you like to see Fighting Fantasy mark the occasion?
Posted by The Warlock at 22:25 No comments:

YOU, the hero of this story, are a member of the Sky Watch keeping the floating archipelago of Pangaria safe. When the Nimbus isle suddenly crashes out of the sky into the Ocean of Tempests below, you must explore the remaining islands, and battle both storms and sea beasts in your mission to raise Nimbus from the deep.

Crystal of Storms, by Rhianna Pratchett, will be released on 1st October.