The game is now available on iTunes, Google Play and Steam. 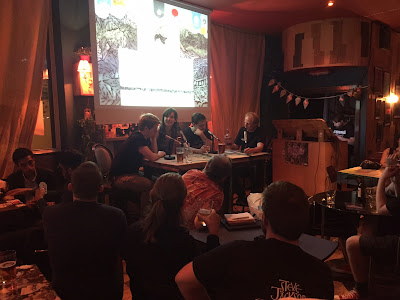 On Thursday 15th September, inkle Studios had the launch of the final part of their adaptation of Steve Jackson's Sorcery! epic - Sorcery! 4: The Crown of Kings - at the Loading Bar in Stoke Newington. 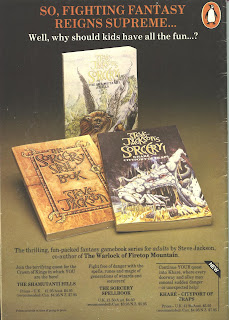 The celebrations were marked by the recording of a special IGN podcast, during which a very enthusiastic audience helped the podcast panellists - which included inkle's Narrative Director Jon Ingold, the Gamesmaster, if you will - decide which route to take, which risks to brave, and which monsters to fight! After all, as the original advert for the Sorcery! series put it, "Why should kids have all the fun?"

Steve Jackson also made an appearance - his arrival being greeted by a round of applause from the audience and embarrassed blushes from the panellists - and chatted with fans afterwards.

The Archmage had concocted various magical potions for the evening's festivities and so the Warlock felt duty bound to sample some of them. Indeed, those who did Test their Luck in this way, were rewarded with download code for the game, which will be released simultaneously on mobile and desktop on 22nd September.

Congratulations to all concerned for a fantastic evening, and I could see the Sorcery! cocktails becoming a feature of future Fighting Fantasy events... 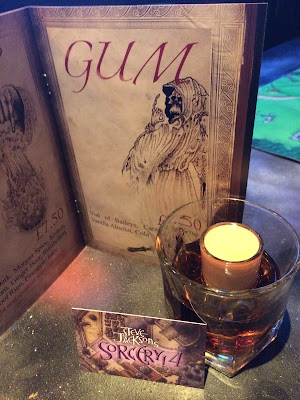 One of the esoteric potions concocted for the evening. 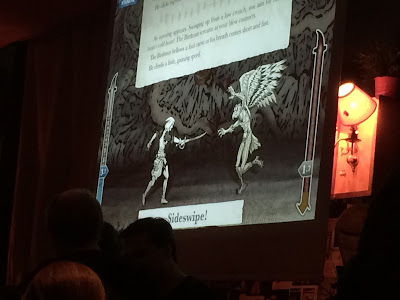 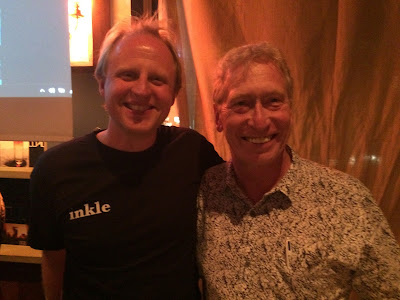 Jon Ingold of inkle and Steve Jackson of Sorcery! fame.

You can see more pictographic representations of the evening's events here.

Ahead of the Sorcery! 4 preview party later today, the Warlock summoned Jon Ingold of inkle studios - the team behind the app adaptations of Steve Jackson's seminal gamebook series - to the depths of Firetop Mountain for interrogation...

The Warlock: How long have inkle been working on the Sorcery! apps for?

Inkle: We've been working on the Sorcery! series for just shy of four years now, from our first conversations with Steve about ideas for the series, through to wrapping up the final bug-fixes on Part 4's Steam build. It's been a huge undertaking for us as a studio - I think, when we started, we imagined we'd put out one game every six months or so, in fairly faithful fashion, but it quickly became clear that there was an opportunity here to do something much more exciting. So the games have taken a bit longer than we expected! But we're fairly sure they've been worth the wait so far.

We can't wait to get The Crown of Kings out there - we love the idea of people having the whole adventure to play through and we've been enjoying referencing as many early decisions as possible in the last part.

When it comes to inkle's Sorcery! adaptation, of what are you most proud? 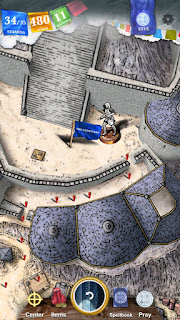 There are a lot of features that we're really happy with. Basing the game around a map, for instance, which completely changed how the game felt. And we're really excited about the 3D work we've done for The Crown of Kings, adding buildings to the mountainous terrain which you can explore inside and outside using a cool cutaway "spotlight" that moves with the player.

But I think what we're most proud of is the move to open-world design that we took from Part 3 onwards. It was really exciting - and challenging - to leave the gamebook "tree" structure behind entirely, and set the player free to explore the game-world in whatever way they could. It allowed us to stuff the game with even more secrets and discoveries, and to really bring the world to life - both in terms of the narrative, and the extra gameplay of the "ancient past" beacons in Part 3.

How many narrative sections does the entire Sorcery! saga run to, now that Part 4 is complete?

One problem with talking about our games is that we don't have a good way to describe how they're built. They're not made from "paragraphs" in the way a traditional gamebook is; or rather, they are, but the paragraphs are just paragraphs which link together to form sections in a flexible way, based on what's going on in the story - and the paragraphs themselves can vary based on the game-state too.
We often simply talk about "words" - there are about 1.5 million in the full series - or choices - about 35,000 options - or about "stitches", which is the internal ink engine name for a paragraph of text, and there are around 60k of those.

Which is your favourite monster in the entire Sorcery! saga?

One thing I love about the series is that each book has its iconic creature - the Manticore in The Shamutanti Hills, the Slime Eaters of the sewers of Kharé, the Serpents of the Baklands and the vicious Birdmen of Mampang.

But my personal favourite has to be the Snattacats, who turn invisible - but only when their eyes are closed. I particularly love that they get a mention in Book 1 - a crazed individual in a tavern mutters about them, as though he was being stalked by things he cannot see... 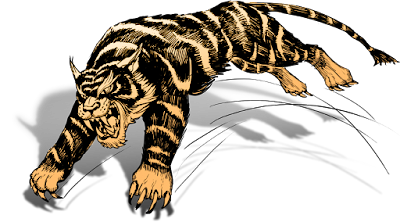 Outside of Sorcery! which are your favourite Fighting Fantasy Gamebooks?

I read most of them when I was a kid, but the one that really stayed with me was another Jackson classic - Creature of Havoc. It just had so many incredible ideas: from the basic story set-up, to the mysterious language, and the incredible "escape" puzzle. I remember playing and playing the intro of that game, over and over, trying to figure it out - and when I did, I felt like I'd understood something of incredible importance about the marriage of storytelling and puzzle design.

Now that you've completed the Sorcery! saga, what can fans look forward to next from inkle Studios?

We've expanded since the early days of Sorcery! and we've actually been working on two games for the last year or so. So with Sorcery! out the door, we'll be all working together on the next game, which is a new story in a brand new world with a brand new kind of interface - and I think it's going to be quite a surprise. We hope people will enjoy it, when it's ready - but it's a little way off yet. But not more Fighting Fantasy for us, I think: it's up to the excellent Tin Man to carry that flame alone for now! 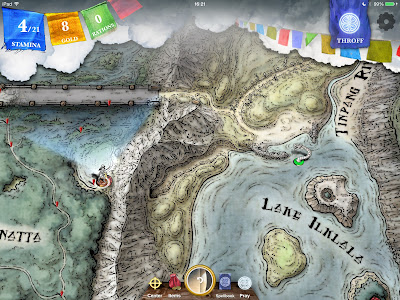 Remember, the Sorcery! 4: The Crown of Kings preview/launch party is happening at the Loading Bar, Stoke Newington in London, tonight - 15th September 2016 - from 6pm. 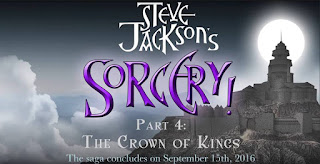 This time next week I imagine some of us will be recovering from the the effects of one too many Luck potions the night before, and you could be too if you come along to the Sorcery! 4 Launch Party! on the evening of Thursday 15th September 2016.

It's free entry from 6.00pm, free copies of the game will be given away during the evening, there will be a live IGN podcast, you'll get to meet the team behind the game, and there will be special Sorcery! cocktails, courtesy of the Archmage's minions. 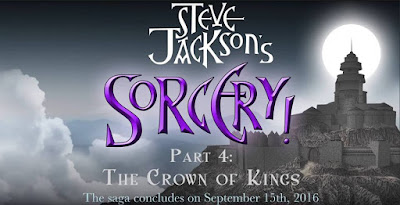 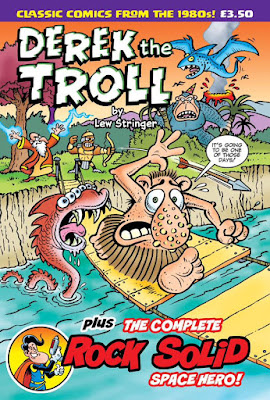 Derek the Troll will need no introduction to fans of Warlock magazine or readers of YOU ARE THE HERO - A History of Fighting Fantasy Gamebooks. Derek the Troll was a comic strip created, written and illustrated by Lew Stringer, whose work has appeared in such publications as The Beano, The Dandy and Viz. First appearing in issue #7 of Warlock, Derek fast became a fan-favourite, making regular appearances right up until the end of the publication’s run.

And now, for the first time in comics history, Lew has compiled the complete adventures of Derek the Troll into one 32 page comic, called - funnily enough - Derek the Troll, which will launching at ICE 2016, the International Comic Expo, in Birmingham this Saturday, 10th September 2016.

So if you're in the area, or you're already attending ICE 2106, make sure you drop by Lew's stand and pick up a copy or two. And tell him the Warlock sent you.

Two years ago today, the first Fighting Fantasy Fest was held at the Double Tree Hilton in Ealing.

As well as featuring Steve Jackson and Ian Livingstone as guests of honour, a veritable artists' gallery of illustrators were in attendance, and even other series authors made a brief appearance, as well as the original commissioning editor Geraldine Cooke, and the series' first desk editor Philippa Dickinson. YOU ARE THE HERO - A History of Fighting Fantasy Gamebooks was launched at the event and there was even an auction of rare Fighting Fantasy memorabilia.

Will there be another Fighting Fantasy Fest? Well, 2017 would seem like a good time to hold one, since August will see the 35th anniversary of the publication of The Warlock of Firetop Mountain.

Fighting Fantasy Gamebooks also received a mention on the BBC technology programme Click at the weekend during a piece on games in education, which included an interview with co-creator of the FF phenomenon, Ian Livingstone. You can watch it for yourself (as long as you have a TV licence) here.

Ian will also be appearing at Play Expo Manchester on Saturday 8th October, giving a talk about his time in the games industry entitled Life is a Game. If you're in the area, or able to travel up for the weekend, why not drop by and join in the fun?