Why not join other Fighting Fantasy fans, from 4:00pm GMT, at today's Halloween Virtual Beer-o?

If you've not been to a Beer-o before, they are a chance for like-minded fans of Fighting Fantasy Gamebooks to get together and chat about their hobby.

They used to be physical meet-ups, but since the pandemic they have moved online, meaning that they now involve people from all over the world.

To find out more, visit this link. And remember - the more the merrier! 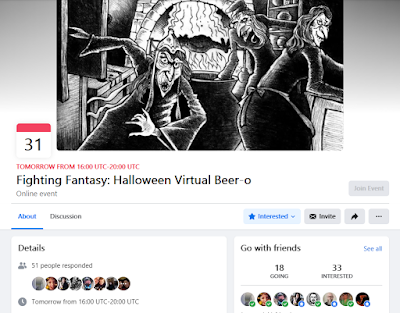 Email ThisBlogThis!Share to TwitterShare to FacebookShare to Pinterest
Labels: Events, Halloween, News, You Are The Beer-O

Blast from the Past! Dead of Night 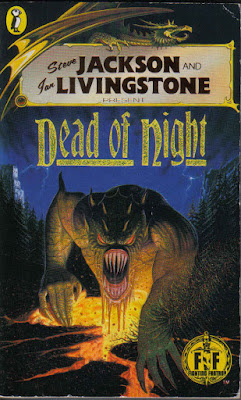 Today being the eve of All Hallows' Eve, it seemed like an appropriate time to revisit this chilling classic of yesteryear - Dead of Night!

First published on 2 November 1989, Dead of Night (copyright Jim Bambra and Stephen Hand) took as its setting the kingdom of Gallantaria. the adventure taking place after the events related in The Tasks of Tantalon. It helped complete the integration of the Old World into the wider Fighting Fantasy milieu, being the first solo gamebook to be set there since The Crown of Kings concluded Steve Jackson's Sorcery! series back in 1985.

Working together – rather like Jackson and Livingstone had in the beginning – Bambra tackled the task with his standard approach to writing fantasy scenarios, whereas Hand was keen to push the limits of what was possible in a gamebook. Hand was also hugely inspired by pulp horror, such as the kind produced by Hammer studios in the 1960s and ‘70s.

They agreed that their version of the Old World would be a grimly realistic place, a slice of a horrific medieval world in which politics would play its part too (as can be seen more clearly in Hand’s later, solo titles). 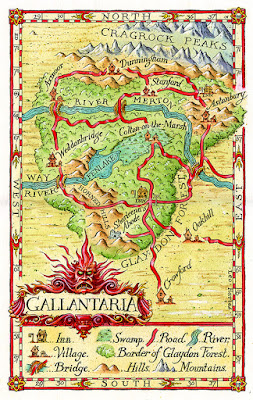 In Dead of Night, the hero is a Demon-Stalker, who has dedicated his life to waging war against the creatures of Chaos. Having thwarted the evil schemes of the Demon Prince Myurr on more than one occasion, the hero’s nemesis exacts his revenge, striking directly against the Demon-Stalker’s family. On top of that, Myurr’s powers are growing and he will soon be able to transport his demonic hordes to the Earthly Plane. The Demon Lord must be stopped!

"On that first book, what happened was that Jim and I plotted all the scenes and characters together," Stephen Hand explained in an interview with AdvancedFightingFantasy.com. "Then we divided the different scenes between us, so I would write one area, and he would write another. When we finished, we actually swapped documents and edited each other's work. This may sound strange, but it worked and lead to a fairly even book written by two very different writers."

In addition to the regular attributes of SKILL, STAMINA and LUCK, Dead of Night features an EVIL score, which start starts at zero. Throughout the adventure, the player may encounter people or creatures, or do things that will increase this score. As a result the player is asked to Test Your Evil at certain points in a manner similar to Testing Your Luck.

The player also has a choice of three "Talents" for their Demon-Stalker, which include Banish Undead, Dark Veil, Heal, Holy Circle, Meditation, Sense Demon, and Speak Demon. 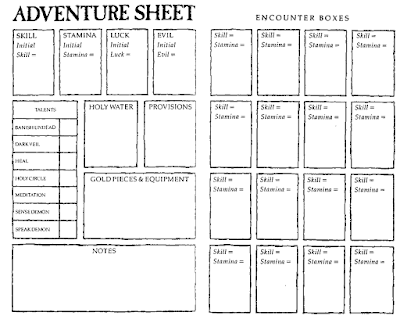 The gamebook was illustrated by Martin McKenna, with a cover by Terry Oakes. 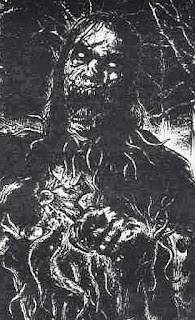 The Abomination, by Martin McKenna.

Dead of Night remains both the first and last time that Bambra contributed an adventure to the FF series, but what a memorable entry it was! Hand, on the other hand, would go on to contribute two more Gallantaria-set adventures before quitting the series - the equally impressive Legend of the Shadow Warriors and Moonrunner. 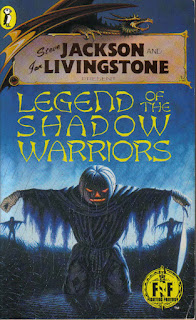 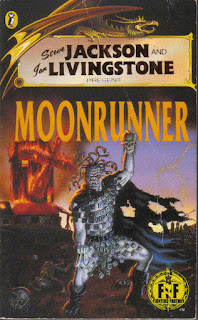 A new fan-drawn map of Allansia appeared online this week... 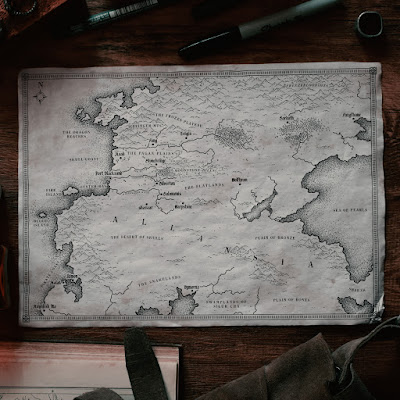 It is the work of Rian Aesoterik, a very talented cartographer. 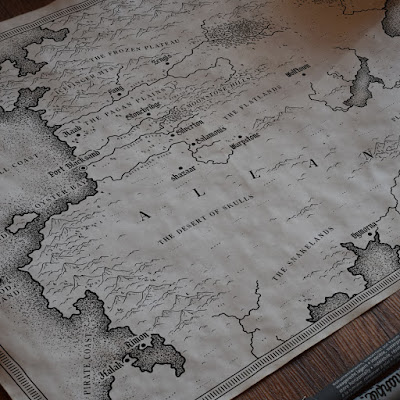 If you have any maps that you have drawn yourself, inspired by the Fighting Fantasy gamebooks and the world of Titan, let us know via mail@fightingfantasy.com, and they could end up being featured here too.
Posted by The Warlock at 09:00 No comments:

Crystal of Storms, the new Fighting Fantasy gamebook by Rhianna Pratchett, has been out now for a couple of weeks and the reviews are in! 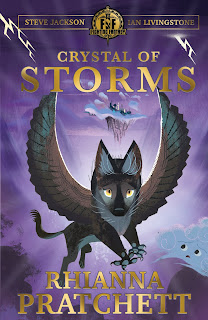 "It's wonderful to read a book by Rhianna after following her work from journalism through to games, comics and screenwriting, and a Fighting Fantasy novel seems a perfect choice for her." ~ Gabrielle, Amazon.co.uk

"It’s a great idea and I really love Rhi’s writing, comparable to Jonathan Green’s and Ian Livingstone’s. This girl is on fire." ~ JamsPlace.co

"If you enjoy FF books, give this a few hours of your time and it will give you hours of enjoyment." ~ Amazon.co.uk
“Her charming writing style and clever, imaginative world-building in Crystal of Storms is a new take on the genre and a joy to read.” ~ Ian Livingstone
"I really enjoyed this and, as it has an open ending, I hope we will see more FFs from Rhianna Pratchett if this is any indication of what fresh new material she can bring to the table." ~ Malthus Dire's Fighting Fantasy Page
Graham Bottley of Arion Games also recently interviewed Rhianna about her book, which is available now via his YouTube channel, and here...
Posted by The Warlock at 14:57 No comments:

Blast from the Past! House of Hell 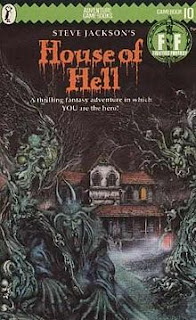 For almost thirty years following its initial release back in 1984, House of Hell remained unique; it was the only FF adventure to have a wholly ‘contemporary’ setting. It was not a futuristic, superhero sci-fi yarn, or a post-apocalyptic adventure, but was Fighting Fantasy’s one and only specifically horror-themed adventure. That was until Blood of the Zombies was published in 2012. There have been other FF adventures that play with familiar horror tropes – notably books like Vault of the Vampire, Moonrunner and Howl of the Werewolf – but all of these are primarily fantasy adventures with a good dose of horror thrown in. House of Hell , on the other hand, is the sort of nightmare you could imagine yourself ending up in if your car broke down on a lonely country road in a thunderstorm only for you to discover that you were in a mobile phone dead spot. Other than the fact that there’s no mention of mobile phones, the plot of the book hasn’t dated in the intervening decades. As a result of the aforementioned breakdown and thunderstorm, the hero takes refuge in an old house, but it’s a decision that turns out to be the worst mistake of his life, since the house is home to a cult of devil-worshippers and their demonic Master. 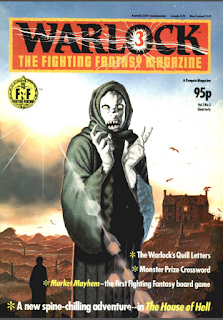 House of Hell first appeared in a shortened form (only 185 references this time) in Warlock magazine. A significant number of references were modified for the paperback version, with rooms being moved around and secret passageways added.

“When I did cover work (I’m not often asked these days), I worked maybe one or two up on the published book size. The image would be penciled in, then inked and coloured. I used Illustration board for the most part… I always read the books I did covers for. It made sense in my opinion… I think the first, House of Hell, was the best of the bunch.”

The book was illustrated internally by Tim Sell. However, one of his illustrations was removed from subsequent printings after a number of complaints were received by Puffin Books. 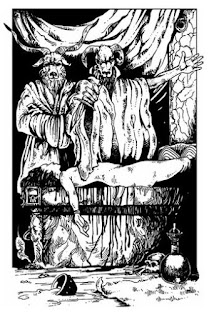 The illustration in question accompanied paragraph 264 and depicted a naked woman on an altar dripping with blood (although her modesty was protected by a convenient cultist’s sleeve). The result of the removal of the illustration was that paragraphs 255 through to 263 had to be moved about and spaced out with additional filler pictures.

“That did give us a problem,” recalls editor Philippa Dickinson. “We had a lot of complaints. The media suddenly got hold of, ‘was this suitable for children?’ We had various, no doubt very well-meaning people, claiming that we were encouraging children to believe in Satan and Satanism... I do remember one of the people who was interviewed for television said that her child had come out with the mark of the Devil on his body and when she threw the book into the fire the marks on his body disappeared.

“It was of that time, and it was because the books were so successful, and boys were getting so obsessed, so what were we doing? They were being obsessed by something, so this can’t be healthy, because they’re obsessed. But they’re reading! What are you complaining about?" 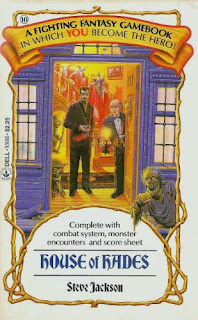 When House of Hell was released in the US it was renamed as House of Hades, since ‘Hell’ was a more common swear-word with religious connotations in America than it was in the UK.

This wasn’t the only time that Fighting Fantasy courted controversy. The FF series has had its fair share of vehemently outspoken enemies in the UK.

“The Evangelical Alliance published an eight page warning guide about the potential danger of reading Fighting Fantasy leading to devil worship!” says a clearly stunned Livingstone. “And a worried housewife in deepest suburbia reportedly said on radio that after having read one of my books, her son levitated. Kids thought, ‘Great – for £1.25 I can fly!’ This was all wonderful PR for Fighting Fantasy.” 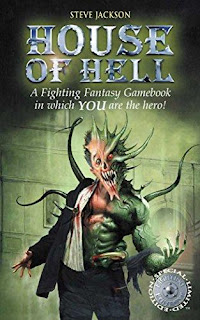 The dedication written by Steve Jackson for the Wizard Books edition of House of Hell reads:

Games Night —
to Clive, Ian, Mark, Peter and Skye.
May their Dinner Winnerships be few.
But always more than mine...

The list of names are the members of an exclusive gaming group that’s been running since the mid-1990s, and which includes Peter Molyneux of  Lionhead Studios fame among its membership. Games Night is still a regular event, and at the end of each season a cup is awarded. 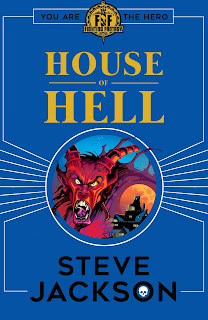 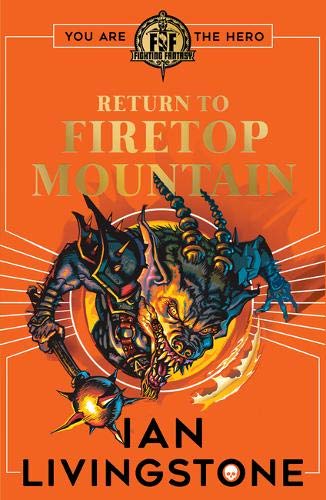 Are YOU brave enough to face the monster-ridden labyrinth within Firetop Mountain?
The evil warlock Zagor has returned from the dead, with revenge his ultimate aim. ​ Have you got what it takes to track him down, defeating terrifying monsters and battling dark magic on your way?
Return to Firetop Mountain is available to buy now.
Posted by The Warlock at 09:20 No comments:

Crystal of Storms - out now!

An astonishingly imaginative, edge-of-your-seat adventure – part story, part game!
YOU, the hero of this story, are a member of the Sky Watch keeping the floating archipelago of Pangaria safe. When the Nimbus isle suddenly crashes out of the sky into the Ocean of Tempests below, you must explore the remaining islands, and battle both storms and sea beasts in your mission to raise Nimbus from the deep.
Crystal of Storms, by Rhianna Pratchett, is available to buy now!
Click the image below to explore one of the islands of Pangaria.