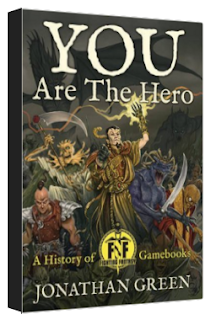 Next Saturday, 19th November 2016, Jonathan Green, author of YOU ARE THE HERO - A History of Fighting Fantasy Gamebooks, will be taking part in WordPlay London at the British Library.

WordPlay is the Hand Eye Society's international festival of writerly games. London has been chosen as the location for this year's festival because of the wealth of interactive fiction talent in the UK, including friends of Fighting Fantasy, inkle Studios. The date, Saturday 19th November, has been chosen to coincide with International Games in Libraries Day.

The panel Jonathan will be on is currently scheduled to take place from 4.15pm-5.00pm, and is called: 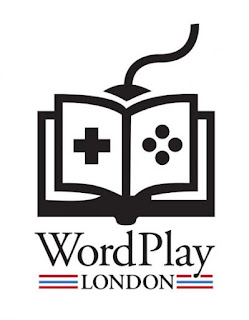 When the Warlock met the Tin Man

Tin Man Games' brand new take on Steve Jackson and Ian Livingstone's classic The Warlock of Firetop Mountain, has been getting rave Reviews from all over the world! With the game having been nominated for an award at this year's Game Connect Asia Pacific (Australia's premiere game development conference) it seemed like as good a time as any to summon the Tin Man himself, Neil Rennison, to Zagor's lair to interrogate... sorry, ask him about his experiences of re-inventing a classic. 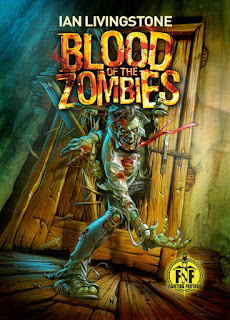 The Warlock: How long have Tin Man Games been working on the Fighting Fantasy apps?
Neil Rennison: Blood of the Zombies came out in October 2012 and we will have started work on that a few months before, so around four and a half years!

TW: When it comes to your latest adaptation of The Warlock of Firetop Mountain, of what are you most proud?
NR: I’m most proud of the fact that we got it made in the way that we did. It was a massive undertaking for us to move from our interactive e-book format to a fully realised 3D world and all the content that needed to fill it. Not only that but we designed a brand new combat system that is great to play and we were able to flesh out Zagor’s world to include lots more stories within the mountain – the word count is currently six times larger than the original book and constantly growing as we create updates for the game!

TW: What was the hardest thing to get right/get to work in the game?
NR: There were a whole bunch of technical hurdles we needed to jump over and we certainly didn’t make any of it easy for ourselves! Ultimately when developing a game of this size there are a lot of moving parts that not only need to work on their own, but need to work with each other. With all this going on, we also needed to maintain the soul of the original gamebook whilst attending to the needs of a more modern gaming audience.

TW: If the app was a book how many narrative sections would your version of The Warlock of Firetop Mountain run to?
NR: There are currently 1400 sections in our version of Warlock, but this isn’t really a good measure for the scale of our version of the gamebook. This is because for every section, we have a filter system that changes the text and choices depending on which hero you take into the mountain. This means that for all 15 of our current heroes (with more to come!), many of the sections have multiple paths within them. 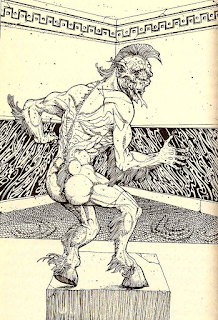 TW: Which is your favourite monster encountered in the adventure?
NR: I really love the big monster figurines that take up more than one combat square. I think my favourite has to be the Iron Cyclops, not only because it’s cool to fight, but we had the figurine custom made to match Russ Nicholson’s iconic image. I would love to get that digital model 3D printed one day.

TW: How easy was it to incorporate the Kickstarter backers' ideas into the adventure?
NR: It was actually pretty easy, mainly down to the fact that the backers who pledged at those higher tiers were great to work with. These backers are hardcore FF fans and already know the book inside out as well as understanding the world lore.

TW: What was it like getting Rush Nicholson to return to the project that made him a household name among FF fans?
NR: That was very special indeed. I couldn’t contain my excitement every time a brand new illustration dropped in my inbox! He’s such an iconic illustrator and a very important part of TWOFM’s appeal. Show any adult, who read these books in the 80s, one of Russ’ illustrations and they are instantly transported back to their youth. His work is somehow magical!

TW: Are you planning any DLC material for the game, and if so, what?
NR: Yes! We are looking to support TWOFM with a number of major updates – some free and some paid. A few weeks ago we introduced three new heroes, which were part-created by our Kickstarter backers. We also included some new features such as an art gallery. We have another major update coming in a couple of weeks called ‘Paperback Heroes’ that includes DLC of three more heroes: Vignor Firestorm, Haldar Eriksson and Ophelia Lapwing. Beyond that we have a big update either later this year or early next year called “Dwarven Resistance”, which will take players into previously unexplored parts of Firetop Mountain and include some new heroes too. We are also planning a Bestiary too in the future so you can take a closer look at those lovely monster miniatures! 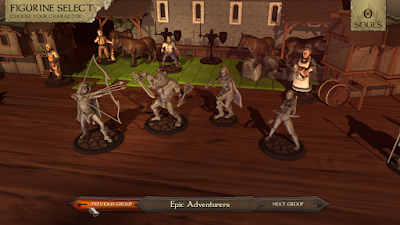 TW: Which are your favourite Fighting Fantasy Gamebooks?
NR: Deathtrap Dungeon, House of Hell and just because of the subject matter, Robot Commando.

TW: What can FF fans look forward to next from Tin Man Games?
NR: More TWOFM updates! We’re committed to the game for some time to come, with a port to iOS early next year and the creation of a classic app version of the gamebook using our old engine.

The Warlock of Firetop Mountain is available now from Tin Man Games. 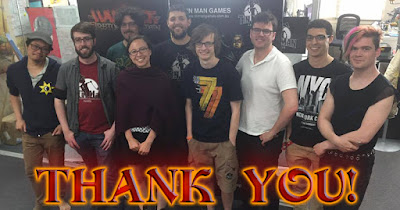 300 days from today, on Saturday 2nd September 2017, something special will be happening in West London to mark 35 years since the publication of The Warlock of Firetop Mountain, so make sure you save the date!

Steve Jackson, creator of the Sorcery! series, author of the Fighting Fantasy novel The Trolltooth Wars, co-creator of the Fighting Fantasy series of gamebooks and co-founder of Game Workshop, will be attending Dragonmeet 2016 on Saturday 3rd December, at the Hammersmith Novotel. (Ian Livingstone will not be in attendance, as he will be attending Comic Con in São Paulo that weekend.)

You can find out more about the event, and the venue, here.

Steve Jackson and Ian Livingstone, co-creators of the Fighting Fantasy series of gamebooks, will be attending Dragonmeet 2016 on Saturday 3rd December, at the Hammersmith Novotel.

You can find out more about the event, and the venue, here.