DICE MEN: Games Workshop the Early Years 1975 to 1985 tells the story of the first 10 years of the global games company, Games Workshop, and the struggles faced by Steve Jackson, Ian Livingstone and John Peake.

The book already had 915 supporters through Unbound, the crowdfunding publisher, but it's not too late to lend your support too. There are still various pledge levels available, but don't delay, as with the final text being delivered to Unbound this month, there's not long left. 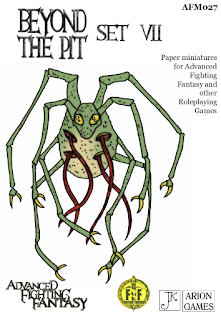 Arion Games have released another set of their paper miniatures, for those of you keen on introducing creatures from the Beyond the Pit bestiary into your games of Advanced Fighting Fantasy, featuring such monsters as the Giant Hornet, Griffin, Grypvulture, Harpoon Fly, Hellfire Spirit, and Iron Cyclops

These bright and stylish creations are offered as flat/A-frame style miniatures, and will enhance any tabletop game. These figures are also scaled the same as the rest of the range for full compatibility.

You can purchase your set here.

Email ThisBlogThis!Share to TwitterShare to FacebookShare to Pinterest
Labels: Advanced Fighting Fantasy, Arion Games, Beyond the Pit, DriveThruRPG, Miniatures, News, Out of the Pit

The Crown of Kings - 35 years of magic

2020 marks the 35th anniversary of the publication of The Crown of Kings, the fourth and concluding adventure of Steve Jackson's seminal Sorcery! series.

Jackson conceived the epic gamebook experiment after holidaying in Nepal, and several of the settlements that appear in The Shamutanti Hills, the first book in the quartet, are named after actual villages he came across on a five day trek he undertook from the city of Pokhara.

The Shamutanti Hills concludes with the hero - the Analander - battling the Manticore that has appeared on the cover of every edition of the book ever published. The second book in the series, Kharé – Cityport of Traps, charts the hero’s challenging journey through the titular city to the spell-locked Northern Gate, through which he has to pass to continue the quest for the Crown of Kings.

The Seven Serpents, the third book in the series, takes the hero across the inhospitable Baklands – a treacherous wilderness of deserts, forests, and swamps – and a vast lake, as the Analander attempts to hunt down and do away with the Archmage’s assassin-agents of the title, seven deadly and magical serpents. And in The Crown of Kings, the hero has to climb through the Xamen Peaks to the Mampang Fortress, and then battle his way through the Archmage’s lair.

The Crown of Kings was a whopping 800 references in length - a record yet to be broken by any other Fighting Fantasy gamebook) – was a suitably epic finale to Sorcery! series, and featured one of the most memorable (and clever) denouements of any adventure ever published, not to mention encounters with a god-headed Hydra and entire societies of birdmen and she-satyrs.

When Jackson talks about the Sorcery! series, he does so, understandably, with great fondness. When pressed on the subject of which of the gamebooks he has written are his favourites, he cites two: “Warlock because it was the first. And Sorcery! because it was the most complex. Creating a four-part adventure in which your actions in Book 2 might affect your choices in Book 4 was a real challenge. Also making sure they were all good adventures in their own right; you didn’t need to have completed Sorcery 1 to play Sorcery 2. I was very proud of Sorcery!”

Of course, in more recent years, the Sorcery! series has been turned into a series of apps by inkle studios, as well as a multi-player role-playing campaign published by Arion Games, while the first two parts of the Analander's momentous quest are now in print again, courtesy of Scholastic Books. 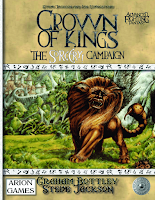 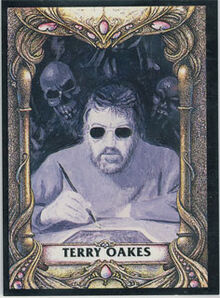 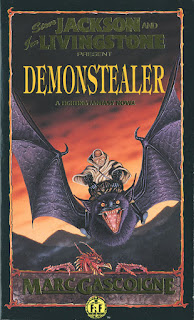 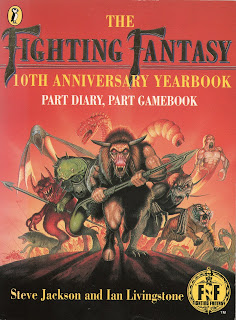 But how long did it take to produce a cover like the one for Demonstealer?

“It all depended on the amount of detail demanded by any particular cover, of course,” explains Oakes, “but as a general rule-of-thumb it took about five to seven days to complete. However, on occasions commissions could be ‘dropped in my lap’, as the saying goes, whereby everything became governed by the dreaded deadline – in which case I would put in an extra effort by working longer hours… Now and then I did manage to finish a piece in three to four days when required.”

Terry also painted a Brain Slayer for Out of the Pit, the cover for Issue #3 of Warlock Magazine, and even branched out into interior illustration with the FF gamebooks Black Vein Prophecy and The Crimson Tide. 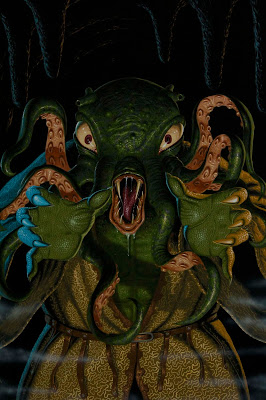 If you would like to send Terry a birthday gift, why not visit Intercept Studios and purchase one of the prints of his Fighting Fantasy covers?