Blast from the Past! Starship Traveller

In March 1983, The Warlock of Firetop Mountain, The Citadel of Chaos and The Forest of Doom topped The Sunday Times bestseller charts. Two more titles, Starship Traveller and City of Thieves, appeared later that same year. 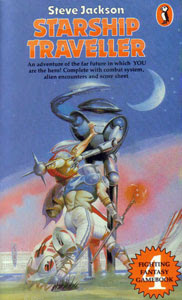 But having only written one fantasy gamebook by himself, why was it Steve Jackson abandoned an alternative Tolkien-esque past for a gleaming, rocket-fuelled future with Starship Traveller? “I liked to try new things out,” says Jackson. “Sorcery! had a new magic system, Starship Traveller was the first SF adventure.”

Set in the distant future, Starship Traveller had the hero become the commander of the eponymous starship and its crew. After their interstellar vessel is sucked through a black hole into an unknown quadrant of space, the hero has to search the local star systems for the coordinates to another black hole and the way home.

As well as keeping a track of his own attributes, the reader had to keep a note of the attributes of his officers. Starship Traveller also added the stats WEAPONS STRENGTH and SHIELDS so that the reader could re-enact battles between spacecraft. 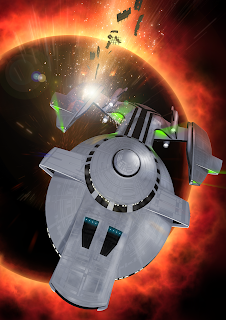 Jackson: “I was a big Star Trek fan. Always preferred it to Doctor Who. Mr Spock was my hero. I liked the episodes where Kirk & Co landed on a planet where they encountered alien races and philosophies. Never liked the deep space battle episodes. Starship Traveller was unashamedly based on Star Trek. And the long dedication was a listing of the entire Games Workshop staff as it was at the time. Some of the GW department heads appeared in the adventure too. ‘Bran-Sell’ was a reference to Bryan Ansell, who ran the Citadel division and later became GW Managing Director. There was a race called the Dar-Villians; a reference to GW’s Sales Manager Peter Darvill-Evans. Fioral was Albie Fiore, who ran the Production Dept. And lots more.” 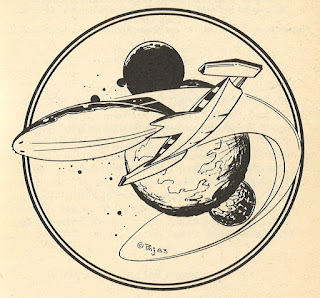 Author Magda Knight is one of the gamebook's many fans: "The illustrations were so enchanting, so full of character, and the book had such fantastic world-building and throwaway genius ideas, like the alien race that grows backwards so it’s the kids you need to speak to. Genius. I was a bit sad to win and make it home in the end.”

In recent years, Starship Traveller has entered the 21st century, re-imagined as a digital version published by Tin Man Games.

Blast from the Past! Freeway Fighter 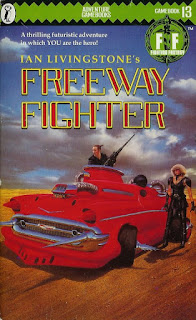 No, it's not your daily news update, but the opening to the blurb of Ian Livingstone's Freeway Fighter. It continues...

Life is lawless and dangerous. Survivors like you either live in scattered, fortified towns, or roam outside as bandits. YOUR mission is to cross the wilderness to the far-distant oil-refinery at San Anglo and bring vital supplies back to the peaceful town of New Hope. Even in the armed Dodge Interceptor you are given, the journey will be wild and perilous. Will YOU survive? 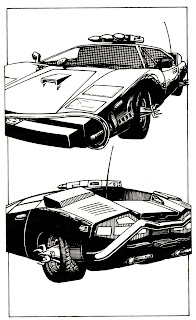 For his sixth solo contribution to the FF range, Ian Livingstone ventured into the realms of near-future, post-apocalyptic dystopian science fiction. Clearly inspired by the Mad Max movies, set in 2022, Freeway Fighter had the hero crossing the wilderness in his heavily-armed (and armoured) Dodge Interceptor, to reach the distant oil-refinery of San Anglo so that he might return with vital supplies for the inhabitants of the peaceful town of New Hope. But success is anything but certain, since the wilds that lie between the scattered, fortified towns are the territory of lawless bandits and brigands.

Vehicular combat was a feature of this particular adventure with the Dodge Interceptor having both a FIREPOWER and an ARMOUR score to represent its offensive and defensive capabilities. 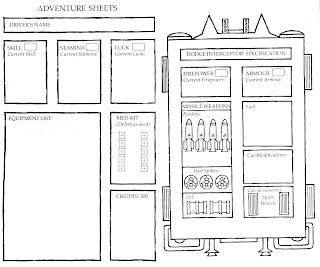 Like Starship Traveller (Steve Jackson’s one and only foray into hard sci-fi Fighting Fantasy), Freeway Fighter has fewer than the standard 400 references, coming in at only 380 paragraphs.

The cover was by the sci-fi artist Jim Burns. When the book was republished by Wizard Books, the cover was reworked by Jim Burns. However, this the painting was not an original piece of artwork for the range, the piece having already been used as far back as 1984 to illustrate the Games Workshop RPG Battlecars. 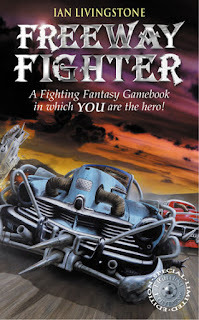 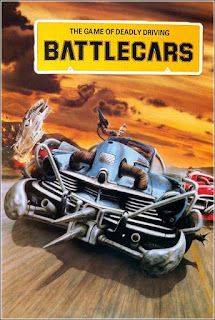 Model-maker and FF fan Stuart Bannister was inspired by Jim Burns' artwork to create a 3D revision. "I enjoy converting miniatures, and I also like making dioramas, so it made some sense to try and recreate scenes from some of my favourite FF books," explains Bannister. “My very first one was to recreate the cover art from Freeway Fighter, using a 1:43 scale model car, dismantling it and adding bits to it in order to build a more futuristic/post-apocalyptic version. I had just watched Mad Max and had re-read the Freeway Fighter book – the front cover illustration remains one of my all-time favourites. Getting a car to the right scale of 28mm miniatures was a problem and then trying to get a really smooth, red finish on the car was a challenge. I had to do a lot of sanding and use a lot of spray lacquer to get the desired effect." 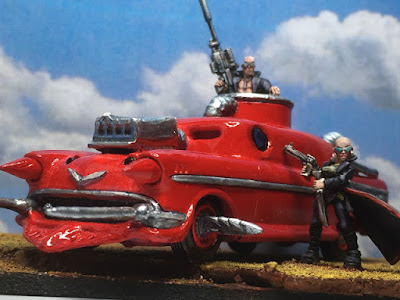 The interior art was by Kevin Bulmer. It was completed in only nine days, as a favour for Ian Livingstone after the original illustrations that had been commissioned, were rejected at the last moment. 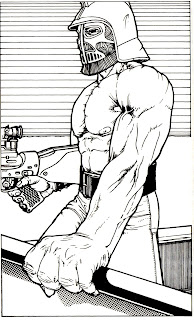 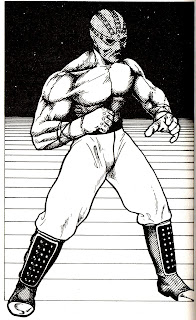 One of the early contenders for internal artist on Freeway Fighter was actually FF legend Iain McCaig, but other commitments meant that it simply wasn’t to be. However, we have an idea of how the book might have looked since McCaig did start work on an image for the book. 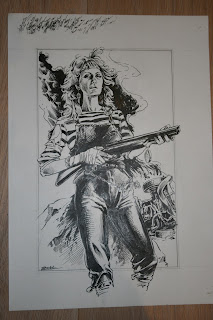 With Fighting Fantasy gamebooks, the reader is always cast as the hero of the adventure. This means that secondary characters encountered along the way enjoy the sort of popularity and fan adoration normally reserved for the protagonists of more traditional novels. In the case of Freeway Fighter, readers demonstrated a particular fondness for the car the hero drives throughout the course of the adventure.

“I wanted to know the background story to the Dodge Interceptor you end up driving in the book,” says Andi Ewington, the creator and writer of the Freeway Fighter comic. “I always found it strange such a car would be found at New Hope without a bigger tale to tell. The comic fills in those gaps and brings a depth to an already existing story.

“Once I had the germ of the plot and I had my main characters, I would cherry pick scenes, encounters and baddies that fans would be familiar with and weave them into the narrative. It was imperative not to mess with the world so it would conflict with the gamebooks too much, so every step I took in the comic I would ensure I wasn’t creating a ripple that would disrupt the source material. It was tricky, but I think I’ve managed to carefully tip-toe my way through it without causing too much disruption.”

Ian Livingstone's Freeway Fighter was published by Titan Comics in 2017, with Andi Ewington's script being realised on the page through Simon Coleby's art, Len O’Grady colours, and Jim Campbell's lettering. It was later collected as a graphic novel, which has since been translated into Hungarian! 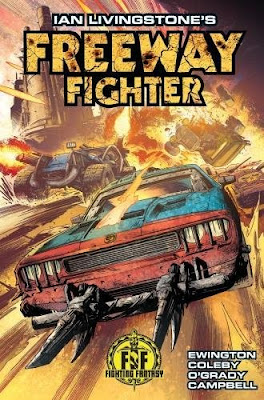 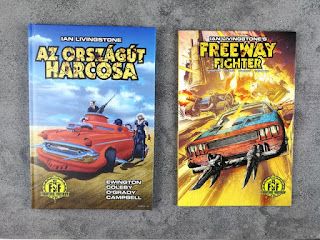 The Hungarian edition of Ian Livingstone's Freeway Fighter alongside the English language version. 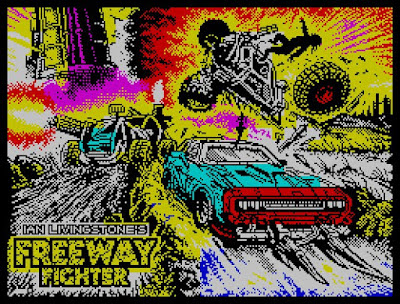 Did you know...?
One of the variant covers produced by Titan Comics for Ian Livingstone’s Freeway Fighter #1 featured the artwork from the original FF gamebook and was exclusive to Forbidden Planet, which hosted the launch event for the comic at its London Megastore, on Saturday 20 May 2017. It was here that Livingstone and Burns were reunited for the first time in a long time. 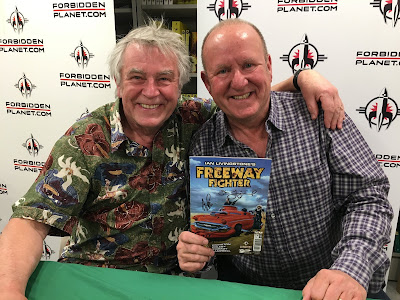 Blast from the Past! Return to Firetop Mountain 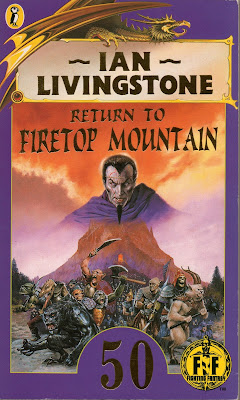 Between the years 1984-1988, Puffin Books published as many as six Fighting Fantasy gamebooks a year from, along with a number of other titles that expanded the FF world in one way or another. But by the early 1990s releases were down to three a year.

“There was a certain cost involved in publishing a new FF book,” explains series co-creator Steve Jackson. “Author advances, artwork, production work… You had to be sure the book would sell enough to break even at least. It was becoming a close thing whether it was worthwhile to publish more than 50 books.”


It was decided between the team at Puffin Books, Steve Jackson and Ian Livingstone, that the publication rate would be ramped up again, with the intention that the release of the fiftieth gamebook, planned to coincide with the tenth anniversary of the publication of The Warlock of Firetop Mountain, would draw the series to a close.

With this in mind, Ian Livingstone set about writing Return to Firetop Mountain, an adventure in which the hero would return to the eponymous mountain and encounter such legendary FF characters as Zagor the Warlock and the Darkwood’s guardian Gereth Yaztromo one last time.

As the title might suggest, Return to Firetop Mountain had the hero returning to that part of Allansia where Fighting Fantasy had begun all those years ago, whilst adding details to the area, especially with the chance to visit the town of Kaad. The diabolical sorcerer Zagor has returned from the dead, ready to wreak his terrible revenge upon Allansia, and so a brave adventurer - YOU! - is dispatched to enter the labyrinthine tunnels beneath Firetop Mountain once more and face the resurrected villain in his lair. 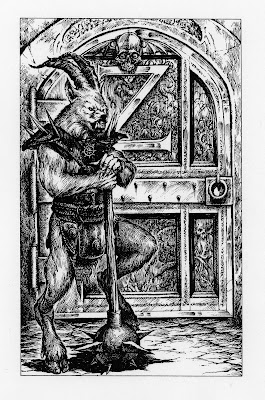 Livingstone dedicated Return to Firetop Mountain to the crew of his sailing boat, an Ultra 30 ten-man racing dinghy, that was sponsored by Games Workshop and which won The Daily Telegraph Ultra 30 Grand Prix UK Championship in both 1990 and 1991, as well as the Ultra 30 World Championships held in Falmouth in 1990. A stylised illustration of the boat even appears inside the gamebook, as do the crew, the names of the characters they represent being Fighting Fantasy versions of their real names.

The buzz surrounding the landmark ten-year anniversary had an unexpected side effect on the FF series. “Return to Firetop Mountain sold better than the last few titles,” explains Jackson, “so Puffin agreed to continue the series.” 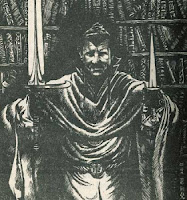 Did you know...?
Ian Livingstone makes a cameo appearance in one of the illustrations in the book, as the Inquisitor, who guards the path to the inner sanctum of Firetop Mountain. If the hero passes the Inquisitor’s trial he is invited to peruse the guardian’s library. Five of the books in the Inquisitor’s collection are named. One is Casket of Souls while another is Eye of the Dragon.

Did you also know...?
One of Kev Crossley’s illustrations for Blood of the Zombies includes an appearance by Return to Firetop Mountain on a shelf in Goraya Castle’s library. 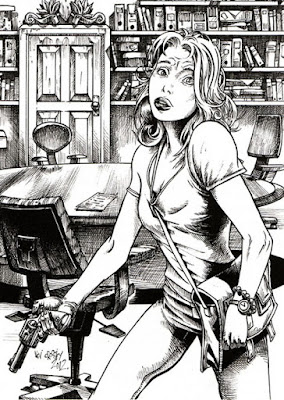 Today is World Book Day, so what better day could there be to pick up a new Fighting Fantasy gamebook, or to introduce the seminal interactive gamebook series to the next generation of young adventurers?