Steve Jackson and Ian Livingstone at the Golden Joystick Awards 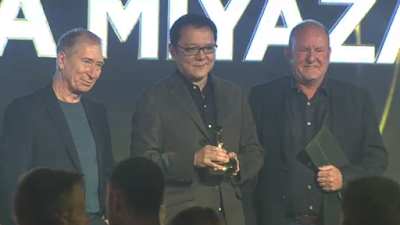 In an interview with Rolling Stone Magazine, when asked, "What kind of books would I find on your shelf if I were to look right now?" his reply was:

"First, you'd spot the manga shelf, with Devilman and Berserk lining the top. The neighbouring bookshelf is packed with tabletop role-playing game rulebooks, with RuneQuest prominently displayed, alongside the board game Dragon Pass. A shelf is packed with novels – old classics of fantasy and science fiction, alongside George R. R. Martin's A Song of Fire and Ice and Fevre Dream. A small library of game books shares the same shelf. At the top is Sorcery! and accompanying guides Titan and Out of the Pit. Finally, you'd find various art and reference books, including work by Umberto Eco and McNeill, and Colin Wilson's The Occult." 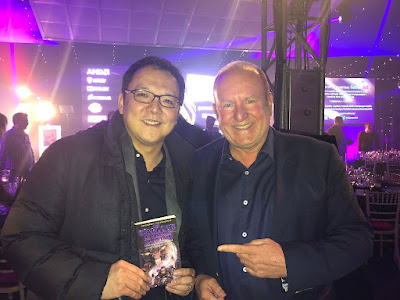 Ian Livingstone with Hidetaka Miyazaki, and The Warlock of Firetop Mountain.

You can watch the entirety of the Golden Joystick Awards below, and if you want to see Hidetaka Miyazaki receive his Lifetime Achievement award from Steve and Ian, jump to 55:20.