It's hard to believe that the Fighting Fantasy Legends Kickstarter by Atlantis Miniatures has only been live for 48 hours, and yet in that time it has raised almost £30,000, having achieved 243% of its original funding goal!

This means that a host of new miniatures have been unlocked, including a pair of Skeleton Warriors, Klash the Chaos Warrior (from The Port of Peril), and new sculpt of the Quag-Shugguth (from the same book), Baron Sukumvit, Lord Carnuss and Lord Azzur, and two of the assassins from Assassins of Allanisa.

Don't forget, on Sunday 20th October at 2:00pm BST, GeekGirlBookWorm will be hosting a paint-a-long of the new Lord Azzur miniature on Twitch. Not only will she be giving the miniature away, once it's painted, but she will also be giving away a signed copy of Ian Livingstone's newest Fighting Fantasy gamebook, Assassins of Allansia! 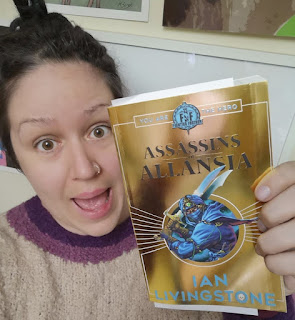 * If you haven't already done so!