Blast from the Past! Vault of the Vampire

Published in 1989, Vault of the Vampire was the 38th gamebook in the Fighting Fantasy series. Written by the late Carl Sargent, under the name Keith Martin, and illustrated by the late Martin McKenna, FF's riff on Dracula is a bona fide classic of interactive horror fiction. 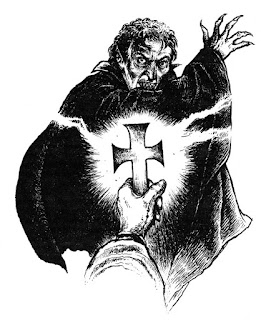 Interestingly, despite blood-suckers appearing on a regular basis throughout the previous thirty-seven titles, up until this point no one prince of the night had taken centre stage and become the Big Bad to be dealt with at the climax of an adventure.

Keith Martin rectified this by transporting the reader to Titan's version of Transylvania, set within the mountainous Old World realm of Mauristatia, replete with wolves howling at the moon, creepy forests, a headless coachman, and a sinister, bat-haunted castle.

The plot is also just what you would want from a story called Vault of the Vampire... 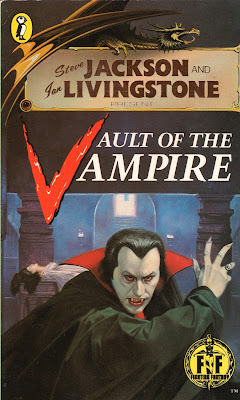 Can you put an end to Count Heydrich's evil reign of terror?
YOU are a hardy adventurer and have journeyed to the icy mountains of Mauristatia in search of great wealth and fortune... but what you find there makes your blood run cold.
You discover by chance the terrible secret of the local villagers. Can YOU free them from the evil tyranny of the bloodthirsty Count, or will you too succumb to a horrifying fate?
Two dice, a pencil and an eraser are all you need. YOU decide which paths to take, which dangers to risk and which foes to fight!
Les Edwards painted the cover for the book: “Vault of the Vampire turned out to be one of those classic images. I can’t say why exactly. It’s just one of those cases where everything works the way that was intended. It’s a pretty traditional Vampire but maybe that’s part of its strength. It’s a simple and dramatic image and very direct. It was a big influence on Vampire paintings that I did subsequently.”

Martin McKenna, who was still only eighteen at the time, turned his hand to producing some very Hammer Horror-esque images for the book’s internal illustrations that have stood up to the test of time very well. 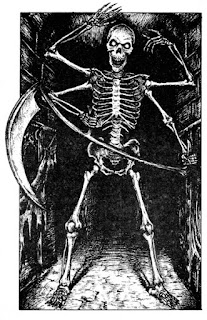 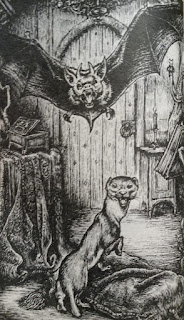 A blood-soaked sequel followed in 1995, entitled Revenge of the Vampire. This was the only occasion a direct sequel to a gamebook was written by an author other than the series’ co-creators Jackson and Livingstone.

Revenge of the Vampire (FF58) was Keith Martin’s seventh contribution to the Fighting Fantasy gamebook series. In the story, Count Reiner Heydrich returns from the dead once more to stalk the Old World in search of fresh blood and new slaves. It is up to the hero (who is not the same hero as featured in Vault of the Vampire) to put an end to him once and for all. 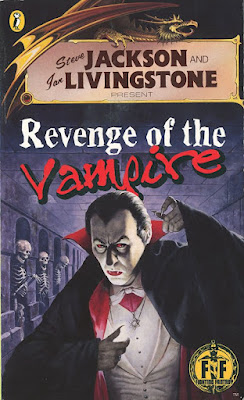 Count Heydrich, Vampire, is back from the dead!

A half-forgotten evil has arisen from the grave to stalk the Old World in search of fresh blood and new victims to enslave. Count Reiner Heydrich, undead Vampire Lord, is ancient beyond the reckoning of mortals. This time, however, there is someone on his trail, a brave hero who is determined that he shall not succeed in his evil plans. That someone is YOU!

As well as being written by Keith Martin, author of Vault of the Vampire, once again Les Edwards painted the stunning cover image while Martin McKenna came up trumps with the internals. 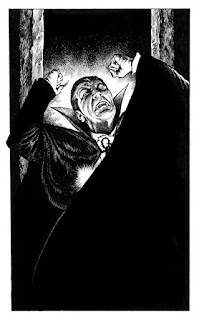 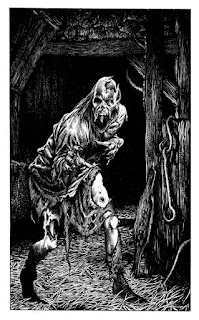 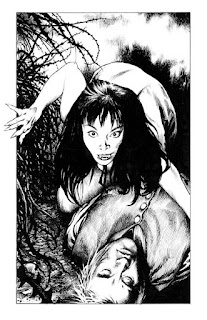 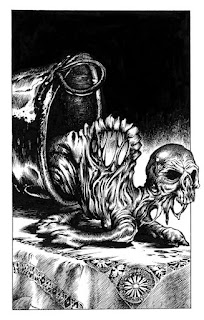 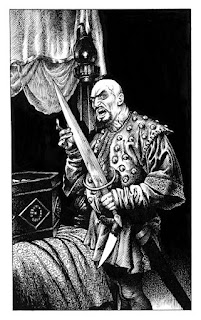 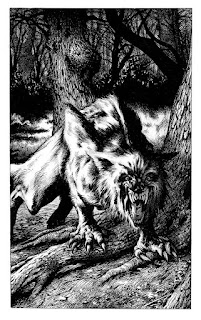