The Second Swordsman - The Monster Mash

Almost a month on from the first anniversary of the Second Swordsman feature, Malcolm Garcia is back with his 15th post, which is called...


The Second Swordsman - The Monster Mash


As I’ve ventured far and wide across Titan, using the process of always choosing the second option has meant I’ve encountered, and slayed, all manner of ne’er-do-wells, animals, the undead, and occasionally even plants. I’ve also met with universal failure. In this episode of the Second Swordsman I attempted three books where the aim of the adventure is ridding the world of one of the classic monsters of legend. 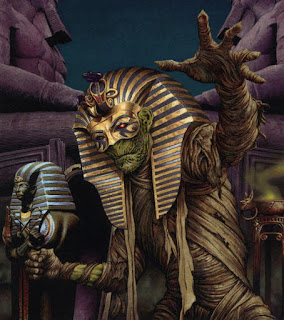 In Curse of the Mummy YOU are hired by an archaeologist who wants to stop a cult from resurrecting an ancient king who will take over Allansia. In Howl of the Werewolf YOU are in a race against time to overcome the effects of being attacked by a werewolf and turned into a werewolf yourself. And in Vault of the Vampire the aim is a relatively simple one – rather than trying to save the world or yourself, YOU need to infiltrate the castle of Count Reiner Heydrich and assassinate him, for he is the vampire who has been terrorising the locals.

There were several other commonalities across these three books. All were illustrated by Martin McKenna and both Curse and Howl were written by Jonathan Green (Keith Martin, who I last did an adventure of in Night Dragon, did Vault). Howl and Vault were both set in Mauristatia in the Old World (while Curse was set in the Desert of Skulls in western Allansia, where I previously met my end against the Giant Sandworm in Temple of Terror). However the outcomes of choosing every second option were quite different in each adventure.

In Vault even though I fought only four creatures, the adventure was quite enjoyable. I started with promising SKILL, STAMINA and LUCK scores and also had the FAITH score to keep track of. This got me out of several battles as my FAITH was able to keep some creatures at bay. Following the Second Swordsman process had me not waste any time and I caught a coach – which included an early test of FAITH – straight to Castle Heydrich. Upon arriving I explored the castle and met some of its various inhabitants, not all of whom needed to be killed on sight. In fact, even though Vault is an assassination mission, in most of my encounters I chose to talk to people and learn more about the evil of the Count and how I could defeat him. Along the way I met an unhelpful alchemist and his homunculus, a doctor motivated only by money, the castle’s helpful governor, the Count’s harmless brother (who I unfortunately did kill), and the Count’s weird and manipulative sister. 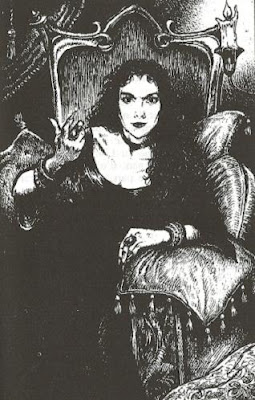 Vault was also enjoyable because choosing the second option was not always choosing to ignore an opportunity for exploration; instead it would give me a different way to proceed. By doing this I managed to find and destroy one of the Count’s coffins, and actually acquired some useful objects, including a STAMINA-restoring ring, a silvered stake and the keys to the Count’s crypt. Unfortunately, I did not find a magic sword, which was referred to several times. 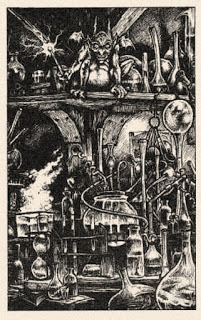 My first fight in Vault was a long way into the adventure, and against a pair of zombies – creatures I haven’t fought since attempting Legend of Zagor. Although they were easily dispatched, the rest of the enemies I encountered were not. After drinking some wine, I was attacked by a vampire bat and vampire weasel. The wine temporarily diminished my SKILL and the weasel scored attacks based on random dice rolls. This meant I lost nine STAMINA in the one encounter, even though the bat only hit me once. Later on, I was attacked by a wraith and, because I lacked the aforementioned magic sword, I was unable to defend myself. While fleeing this fight my STAMINA was reduced by eight and my SKILL by one. Later, in the crypt itself, I faced off against the stench ghoul whose foul odour reduced my SKILL by a further two, which I think was a bit severe. Thus disadvantaged I was paralysed by the ghoul and eaten alive.

I also started Curse with some decent starting scores and was given a POISON factor to keep track of. As in many Jonathan Green books (such as Bloodbones, Spellbreaker and Stormslayer) I had a fight at the very start of the adventure. I then headed into the desert for another fight, after which, choosing the second option meant I returned to the oft-repeated pattern of ignoring opportunities to investigate the desert. During this journey I had some more fights, but then an imposed SKILL loss at the start of a fight against a Great Baboon resulted in a very close battle, from which I came off second best. Thus my defeat in this journey into the Desert of Skulls was even quicker than in Temple of Terror.

The outcome of making every second choice in Howl could not have been more different. Similar to my earlier attempt at Battleblade Warrior, in Howl I fought a lot of creatures – exactly 22 in both (I also fought 22 creatures in Stormslayer). And as in Battleblade, I also came tantalisingly close to success in Howl. But more on that later. I started with poor STAMINA and LUCK scores and, as happened in the other two adventures, had an additional factor to keep track of – the CHANGE score, which keeps track of how dire the hold of the lycanthropy is on YOU. As in Curse I had a fight at the very start, but this only lasted for two rounds before I fell over and got bitten by the werewolf. For the rest of the adventure the Second Swordsman process meant I tended to engage with people if they were by themselves or in small numbers, but ignored larger groupings and towns. 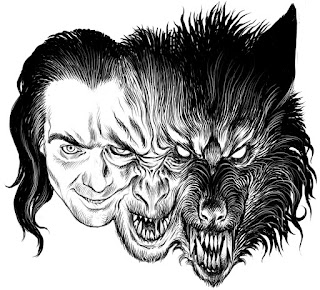 In Howl there are several opportunities to go on side quests, usually to assist the locals who live in this tormented part of Mauristatia. However, I only undertook one of these, and with no success – other than finding another creature to add to my tally. Eventually my own body began to experience the effects of the lycanthropy and I gained some new abilities, as well as additional SKILL and STAMINA points. This pushed my SKILL score to 12, which made most creatures no match for me. I eventually reached Castle Wulfenstein, home of the head werewolf (and possibly a video game from the 1990s) and choosing every second option led me to an amazing healing potion and to Count Varcolac himself. And it was at his feet that my journey ended. Without a special sword (again!) the demon inside the Count defeated me. Having come so close to success I went back and revisited some of my choices. I thus found that had I made one just choice differently (by not ignoring an opportunity to investigate a place) I would have gained the special sword relatively easily, and with it, almost certain victory. 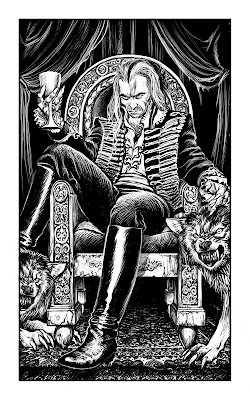 And so, the Second Swordsman process proved to be no match for the evil that surrounded the big three monsters – the vampire, the werewolf and the mummy. Some luckier dice rolls would likely have made all the difference in Curse, and one different choice would have given me a rare success in Howl.  I’d also like to return to Vault, both to try and find the magic sword and grant the Count’s brother the benefit of the doubt. And to give that vampire weasel a damn good kicking. 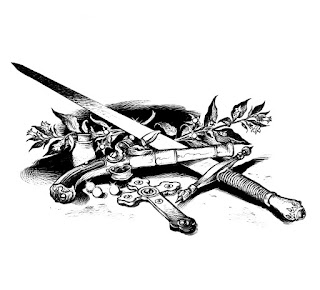 Thank you once again to Malcolm for his latest entertaining Second Swordsman post. You can read more about the three adventures featured in this month's Second Swordsman in YOU ARE THE HERO - A History of Fighting Fantasy Gamebooks.

The book's author, Jonathan Green, will be attending Bath Comic-Con tomorrow (Saturday 17th March) and will have copies of the book on sale, if you are in the area and would like a signed copy. 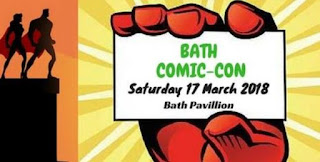 Email ThisBlogThis!Share to TwitterShare to FacebookShare to Pinterest
Labels: Curse of the Mummy, Fighting Fantasy, Fighting Fantasy Gamebooks, Howl of the Werewolf, Malcolm Garcia, The Second Swordsman, Vault of the Vampire