Next week the next tranche of Fighting Fantasy titles are released by Scholastic Books, and among them are three classic titles by Steve Jackson - Creature of Havoc, Appointment with F.E.A.R. and Sorcery! 1: The Shamutanti Hills. 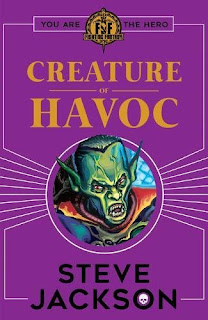 Utilising a device that has been imitated in numerous gamebooks many times since (and not just Fighting Fantasy ones), Creature of Havoc begins with the hero waking up with no memory of where they are, how they came to be there, who they are or even what they are. The hero is the havoc-creating Creature of the title!

Featuring a flying ship, an undead Half-Elf and Zharradan Marr, an evil witch-born sorcerer, it is a truly memorable adventure with some wonderful set-pieces.

The book took Steve Jackson five months to write and has the longest background section of any FF adventure, containing information on everything from Elven birthing practices to the sorcerer Volgera Darkstorm.

"Always looking for new angles, I’d decided that Creature of Havoc would set the reader as a monster," says Jackson. "That was a new feature. And that I wouldn’t be bound by the 400-reference adventure. I was particularly pleased with the reader having to learn a language." 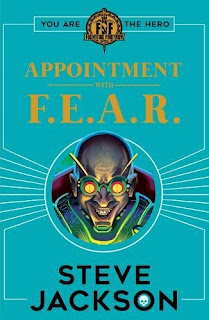 Appointment with F.E.A.R. was inspired by the comic books Jackson had so loved as a child and involved more problem-solving as opposed to the item collection ‘shopping list’ approach of some gamebooks. The action takes place in Titan City with the hero assuming the role of Jean Lafayette and his alter ego, the crime-fighting Silver Crusader.

The Silver Crusader does battle with such colourful characters as the Scarlet Prankster, the Serpent and the Alchemists, as he struggles to discover the time and location of the next meeting of F.E.A.R. – the Federation of Euro-American Rebels – an evil organisation led by Vladimir Utoshski, a.k.a. the Titanium Cyborg.


The adventure begins with the reader choosing one of four superpowers for the Silver Crusader from Super Strength, Psi-Powers, Enhanced Technological Skill (or ETS), and Energy Blast. Appointment with F.E.A.R. also makes use of a new HERO POINTS attribute. These points are awarded for every villain the Silver Crusader captures and every potential disaster he manages to avert. Rather like Batman, the Silver Crusader is not permitted to kill his enemies, and any such deaths that may occur result in the loss of precious HERO POINTS. 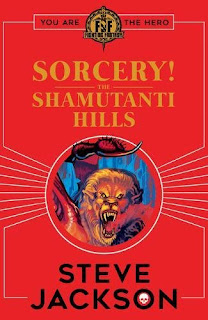 You can read more about the first book in the Sorcery! series - The Shamutanit Hills - here.

New editions of Creature of Havoc, Appointment with F.E.A.R and Sorcery! 1: The Shamutanti Hills will be published on 5th April 2018, and you can read more about the stories behind the gamebooks in You Are The Hero - A History of Fighting Fantasy Gamebooks.

In other news, Fighting Fantasy historian Jonathan Green will be attending the Chatham Dockyard Festival of Steam and Transport on Sunday 1st and Monday 2nd April 2018. So if you're in the area, and you've yet to pick up a copy of YOU ARE THE HERO or YOU ARE THE HERO Part 2, why not pop along?

Tell him the Warlock sent you.


* Or should that be Galleykeep Crusader?