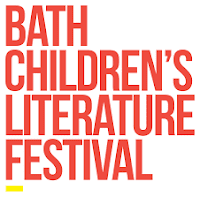 The Gates of Death festival tour continues this September, when Ian Livingstone and Charlie Higson will be visiting the Bath Children's Literature Festival to talk about writing Fighting Fantasy gamebooks.

Charlie recently visited Durston House School in Ealing, where the boys, having been inspired by a previous visit from the author during their annual Literary Festival, had worked together to write their own adventure gamebook, entitled School of Scares. 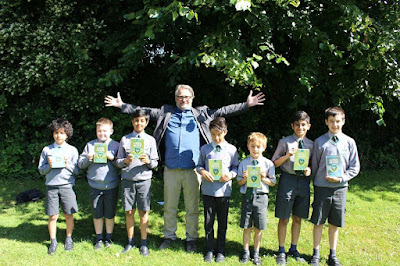 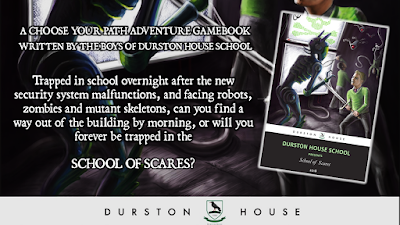 Back at the end of May, Steve Jackson joined Charlie at the Hay Festival. And here's what Steve had to say about the event:

“Thanks to all those who came along to the Hay-on-Wye Festival of Literature at the end of May to listen to Charlie Higson and I talk about all things FF.

For those who know little about the annual Hay Festival before (like me) this is one of the UK’s largest Book Festivals, in its 31st year.

With Ian and Jon off to UK Games Expo in Birmingham (an unfortunate clash), Charlie and I hosted the Hay event. Scholastic were keen to promote Gates of Death and many copies of Charlie’s gamebook were sold at the signing afterwards. The signing lasted for 50 minutes! Having recently broke a couple of fingers, including my right-hand index finger, many of the fans got rather a scribbly autograph! Sorry about that.

Before we left, we were approached by a familiar face. It was none other than comedian Dara O’Briain, who also read Fighting Fantasy in his youth. And for a few minutes we greeted and congratulated each other, like a meeting of two Japanese businessmen of equal status.

Our talk was packed (tickets sold out well before the event) and it was good to see so many dads who had brought their kids along, helping to pass the FF legacy over to the next generation. 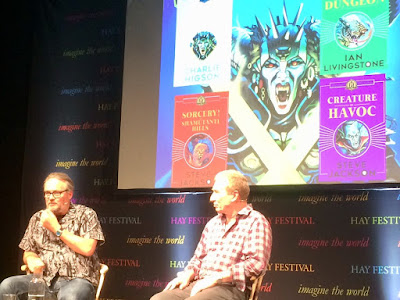 Charlie Higson and Steve Jackson at the Hay Festival 2018.