Blast from the Past! Clash of the Princes 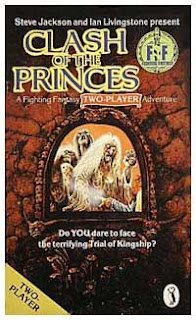 In 1986 the first two-player Fighting Fantasy gamebook experience, Clash of the Princes, was published.

“I remember one of the Penguin editors saying they’d had a submission from Australia which was a two-player FF game,” Jackson recalls. “We agreed it should be in the FF series.”

Clash of the Princes was written by Andrew Chapman (author of Space Assassin, The Rings of Kether and Seas of Blood) and Martin Allen (who would go on to write Sky Lord).

As to what Clash of the Princes was all about, the blurb on the back of the book said it all: 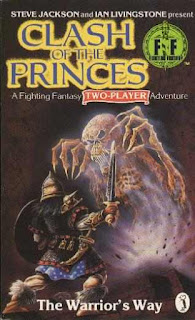 The perilous Trial of Kingship awaits you! In the golden city of Gundobad, you are twin princes – one a Warrior-Prince and one a Warlock-Prince – each with your own particular skills and strengths. It is time for one of you to succeed to the throne, and you must face the Trial of Kingship. But only one of you can win through. Which brother will it be?

Beware! Vile monsters and deadly dangers lie in wait. Two dice, a pencil, an eraser – and a friend! – are all you need. 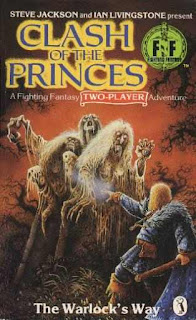 The two books that made up Clash of the Princes – The Warrior’s Way and The Warlock’s Way – were released as a boxed set. They could be still be played as standard solo Fighting Fantasy gamebooks but of course they could also be combined to create a unique two-player role-playing experience. Two new attributes were used in the two-player version, ACTION and STATUS. These allowed the two players to synchronize their individual gaming experiences.

The Warrior’s Way cast the hero as Clovis, Warrior-Prince of the golden city of Gundobad. The Warlock’s Way made the hero Lothar, the Warlock-Prince, Clovis’s twin brother and rival. In the books, both set out upon the somewhat draconian Trial of Kingship to see which of them will succeed to the throne of Gundobad.

The two books were both illustrated by John Blanche, inside and out. “I think Clash of the Princes came about because Geoff Taylor recommended me to the publishers,” reckons Blanche. 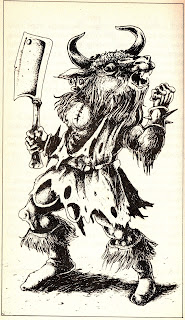 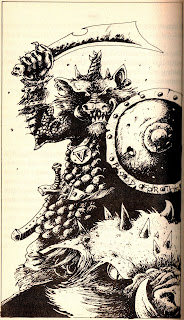 Both books have a total of 500 references each, making a grand total of 1,000 altogether. Chapman would later remark on how frustratingly hard and time-consuming the project was to get right. Unsurprisingly, it took a great deal of work to make sure the mechanics worked properly. Chapman and Allen envisaged the books as being released separately but simultaneously. Puffin, however, made the decision to release them as a boxed set.

Despite Puffin being keen to push Clash of the Princes as a two-player FF experience, they were not keen to repeat the experiment. The Warrior’s Way and The Warlock’s Way were the first Fighting Fantasy titles to drop out of print as retailers at the time were not fans of boxed sets, and so Clash of the Princes was not only the first two-player FF gamebook experience, it was also the last. 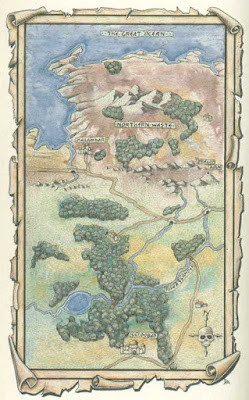 The map that appeared in the Clash of the Princes, by Dave Andrews.
Posted by The Warlock at 15:03