Are YOU ready to raise an army? Can YOU defeat the nightmare army of the undead? Agglax the Shadow Demon is amassing an army of undead warriors to conquer Allansia. Setting off from Fang with over two hundred veteran fighters, YOU journey east to meet the enemy. But the Shadow Demon is not of this world and special powers are needed to destroy him. The longer you spend searching for these powers the stronger he will be.
One of three incoming additions to the Fighting Fantasy Classics library, Armies of Death is a direct sequel to Sir Ian Livingstone's second Deathtrap Dungeon-set adventure, Trial of the Champions.
Having survived the deadly dungeon and claimed the prize of 20,000 Gold Pieces, YOU must raise an army using your newly won fortune to save Allansia from the Shadow Demon's invading army. 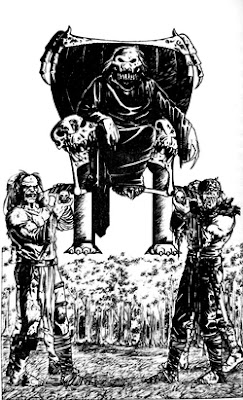 Agglax the Shadow Demon, by Nik Williams.
Armies of Death uses a new combat system that allows your troops to fight against multiple opponents, as you take the battle to Agglax. The digital adaptation will feature new interior illustrations but you will doubtless be pleased to hear that Tin Man Games have secured the rights to use the original cover artwork by Chris Achilléos, who sadly passed away last year.
Keep your eyes peeled for more announcements before the end of the year!
Posted by The Warlock at 09:37