As of posting, there are just 12 hours left to secure yourself an Early Bird ticket for Fighting Fantasy Fest 2. And don't forget that the Adventurer's Backpack now also includes a limited edition Balthus Dire miniature. 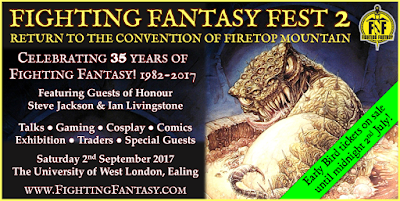 Doors open on Fighting Fantasy Fest 2 at 9:00am on Saturday 2nd September, at the University of West London in Ealing, at which point attendees will be able to register, collect their backpacks, and enter the venue. 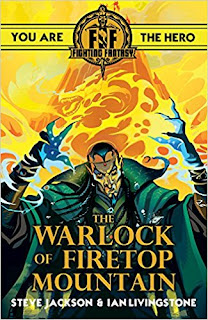 Following a welcome talk in a lecture theatre (that seats 300 people) the day will be filled with all manner of FF-related activities. There will be two separate strands of talks, featuring the creators of the original gamebook series as well as new companies taking Fighting Fantasy in new and interesting directions, and one of these is FoxYason Music Productions.

FoxYason Music Productions will be presenting the launch of the a new, exciting range of full-cast, original audio dramas, beginning in September, with the release of the first story in the series, The Warlock of Firetop Mountain. Members of the production team, plus cast, will be at Fighting Fantasy Fest 2 to officially launch the range featuring interviews, clips, a Q&A and the plans for the future range. 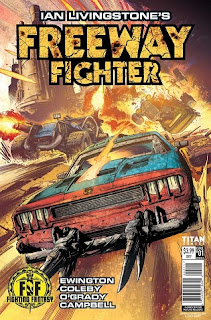 Other highlights of the day will be Nomad Games showcase of Fighting Fantasy Legends, and inkle Studios taking attendees back to the world of Steve Jackson's Sorcery!, while the creative team behind Ian Livingstone's FREEWAY FIGHTER will be there to talk about the gestation of the very first Fighting Fantasy comic.

There will also be guest signings (and we do not charge for signatures at Fighting Fantasy Fest 2, in case you were wondering), role-playing game sessions, cosplay, an FF exhibition, numerous traders, a cafe and bar on site, and the opportunity to hang-out with fellow gamebook fans, as well as an auction of rare FF items!

There are still a few Early Bird tickets* left, so don't delay and grab yours today!

* Early Bird Adult tickets are £35 each, but after midnight tonight they will go up in price to £45.