After coming so very close to succeeding in my first FIGHTING FANTASY adventure by arbitrarily choosing every second option (in Battleblade Warrior) I decided to attempt a trio of adventures which, while starting on the familiar world of Titan, soon cast the adventurer far away into places hitherto unknown.

In Spectral Stalkers, Portal of Evil and Phantoms of Fear YOU start as an adventurer on the continent of Khul. I’d previously only visited Khul when attempting Seas of Blood and was looking forward to exploring more of the land-based perils. Spectral and Portal start off in the south-west of the continent, near the town of Neuburg and were both written by Peter Darvill-Evans (his other addition to the FIGHTING FANTASY range being Beneath Nightmare Castle, which is actually set in Neuburg). Phantoms is set in north-east Khul and was written by Robin Waterfield, who also penned Masks of Mayhem and Deathmoor (which I’ll attempt if I can ever get my hands on a copy without having to sell a kidney). 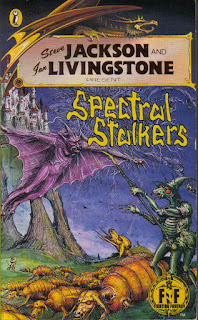 In Spectral I started off with impressive SKILL and LUCK scores, but my STAMINA was not so great and I had only two meals and a small amount of gold. But none of this would be of any consequence as choosing every second option proved to be a particularly foolish process to use in this adventure. At the very start YOU are whisked away from Khul after coming into possession of a magical artifact that is being sought by the eponymous Spectral Stalkers. But from the very beginning of Spectral I had no idea about what I should be doing or where I should be going. While this was initially intriguing, it soon gave way to a feeling of helplessness. 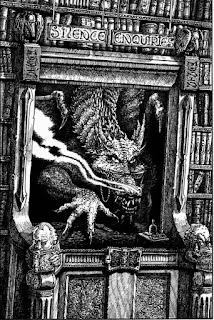 I bumbled through the Library of Limbo (ignoring advice from a dragon librarian) and, despite several opportunities to do otherwise, failed to learn anything useful about the world I was in or my quest. I managed to ignore so many things in Spectral that I didn’t even have a single battle in the whole adventure. (The only other time this happened was in Island of the Lizard King – where I died within four choices of the start). I also never once got to Test my Luck. I got the feeling in Spectral that I made a poor choice near the start which would have otherwise led to me gathering some important knowledge and objects. What killed me in the end was suitably anticlimactic – it wasn’t a horrible trap or a fiendish beast, but a moat of acid. Even Deathtrap Dungeon provided some imaginative expanding fungus to finish me off. 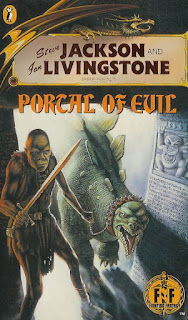 Giving southwestern Khul (and Peter Darvill-Evans) the benefit of the doubt, I returned there to explore the mystery of the Portal of Evil. This adventure is set in the wilderness between the cities of Zagoula and Neuburg, but the eponymous portal promised to whisk me far away from all of this, if I could survive long enough to find it. Which I didn’t. It all started so very well, with decent SKILL and STAMINA scores (and a joke in the introduction about lawyers being akin to thieves). But then I adopted a passive approach that is all-too-familiar when choosing every second option. While I did get to fight my first ever FIGHTING FANTASY dinosaur, the battle was over before I could kill it, I also failed to help a talking dinosaur, didn’t search a body of a foe I’d killed, and even ignored a shiny thing hidden in a tree. Surely everybody knows that on Titan adventures can succeed based solely on the possession of shiny things!

I also, in a manner similar to Spectral, had the feeling that I made a poor choice early in Portal. There were several times at relatively early stages of my quest where I was asked if I had certain specific objects I’d yet to come across – a ring of zombie warding, a warrant from the Margrave, and even some gold coins. This happened often enough to make me believe I had missed out on an important chunk of the adventure by following the Second Swordsman process. In another disappointment, my failure in Portal was brought about by being captured by a group of soldiers. While this isn’t my biggest failure, I’d put it on par with my fate in Trial of Champions. 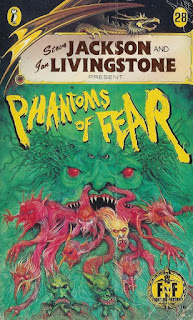 And so then I travelled far, to the north-east of Khul and the Affen Forest to become a Forest Elf and learn from a dream that I needed to defeat a Demon Prince. In Phantoms dreams are an important part of the adventure; you learn things through them, and at later stages of your quest you can alternate between the real world and the dream world. The illustrations by Ian Miller (who did the covers for several FIGHTING FANTASY novels but only did the internals once) enrich the nightmarish atmosphere of the adventure which, for the most part, gave me a sense of being worn down by despair.

My initial SKILL, STAMINA, and LUCK scores were reasonable (but not great), and Phantoms added a POWER score which gave the ability to cast spells. Unlike Spectral, from the beginning of my adventure I knew where I needed to go, and I fought plenty of creatures along the way – sixteen in total. Several of these battles were made more difficult by imposed losses of SKILL (I’m looking at you Fog Devil and everything I faced after breathing in the evil mist). I also had several battles where there were a few too many unlucky rolls of the dice (against the Wolves – who almost killed me – and a Komodo Lizard). But I was saved from an early defeat in Phantoms by my own food scavenging skills, and choosing the potion of strength at the start of the adventure. What didn’t help me was anyone at all. There were no friendly witches, merchants or fellow adventurers to give me any advice or special objects; I was on my own from the very beginning. 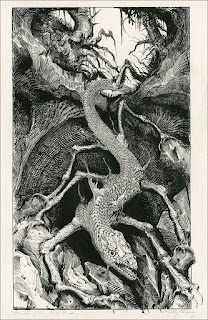 After making my way through the depressing part of the forest, that had been blighted by the evil of the Demon Prince, I finally entered their underground lair and gained the ability to control my shifting between the real and dream worlds. Rather than do this at every opportunity I made the decision to do it every second time it was offered. The two worlds are parallel to each other – a path you take in one will move you forward in the other. But soon after my first attempt at changing into the dream world, my real world body was attacked and I had to change again to complete the fight. Then, on my second opportunity to enter the dream world, I had to fight a mirror image of myself, a fight that somewhat arbitrarily took the shape of a series of random dice rolls, of which I lost way too many and was killed.

All in all these three adventures were a rather unsuccessful attempt to find success away from the familiar world of Titan. I never reached the portal in Portal, I entered the dream world only fleetingly in Phantoms and, while I went far away in Spectral, I never knew what I was trying to do when I got there. But I was intrigued by the world I visited in Spectral, and the depressing atmosphere of Phantoms meant I’d visit both of these FIGHTING FANTASY adventures again one day. 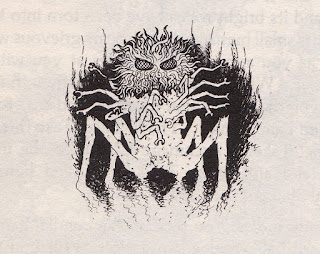 Thank you, once agin, to Malcolm, for another Second Swordsman blog post. If you have any suggestions for items for the official Fighting Fantasy blog don't forget to get in touch via mail@fightingfantasy.com.